Riding isn’t a sport… or is it?

“Why doesn’t Valegro get the medal?  He did all of the work?”

“Oh my gosh.  If you think riding is so easy, why don’t you come ride my horse?  He’ll show you how hard it is!”

These are the conversations I have been reading on social media these past two weeks.  With every Olympics comes a new wave of anti-equestrianism.  Anti-horse.  And even, from our own corner, anti-sport.

I grew up hearing these same things on a daily basis.  I was that girl.

The girl who never attended the after-prom party because she had a show the next day.  The girl who quit softball because the coach wouldn’t let her miss a game for a clinic.  The girl who left school early on Thursday’s to travel across the state for an event.  The girl no one understood.

I was tormented, I was bullied.  I was told my passion wasn’t a sport.  I was told my horse was stupid and smelly.  I was labelled the rich kid.  Equestrianism was not understood in the small industrial town of Meadville, Pennsylvania. Being an equestrian was not only not understood, it was picked on.

I was that girl.  The one who only found solace in the barn. With my barn friends.

But I have lived in blissful ignorance for some time now.  I moved to Lexington, Kentucky – the mecca of all thing horses.

I went from defending the intensity of my hobby to trying to convince my friends that eventing isn’t actually that dangerous.  I am surrounded by friends and loved ones who don’t mock my passion – they relish in it.  And those friends and family members from yesteryear have come to terms with the fact that at the age of thirty, there is minimal chance of me ever changing.

My weeks are spent as a doctoral candidate at the University of Kentucky – in one of the only programs in the nation that has an entire department in place to study everything about The Horse.  My mornings are spent collecting stallions and breeding mares. My evenings are spent riding my numerous thoroughbreds. 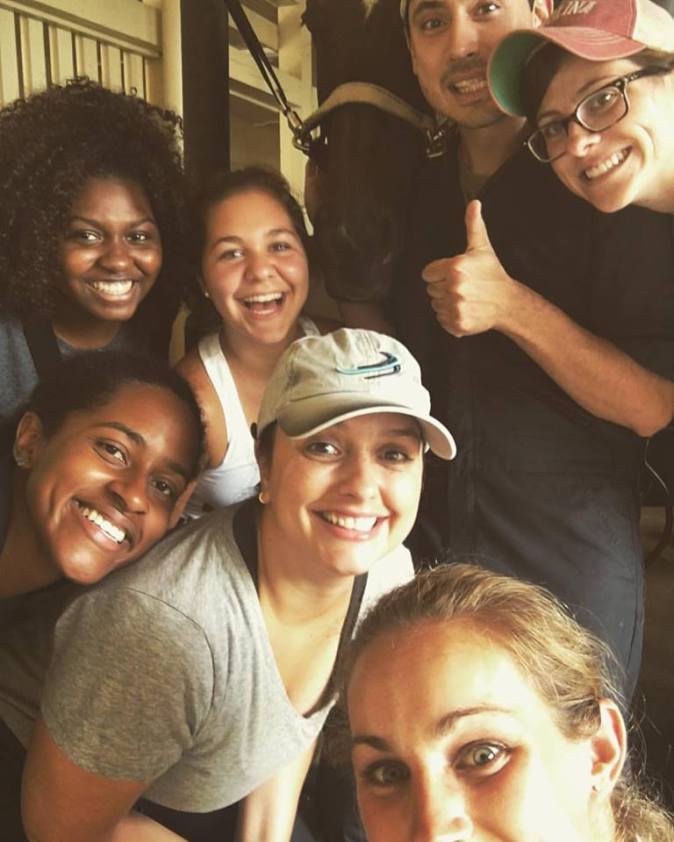 Friday nights of my younger years were spent missing out on the latest party, but are now replaced by a glass of wine in the stands of the Grand Prix.  Saturday’s are spent at the races, shoulder to shoulder with thousands of others who will have to wake up on Sunday, and hungover or not, put on a bandage, muck a stall, or hack a set. And at the end of the day on Sunday, I am snuggled up on the couch with my Super Significant Manfriend – a Broodmare Manager himself.

My life IS horses. It is the Kentucky way of life.

So in blissful ignorance of the last 8 years of life, existing in My Old Kentucky Home, I thought that the rest of the world had changed.

But 20 years later, I have come to realize just how little it has. I watch through social media as other young girls are tormented.  These young ones, whom I have met through the local events or just through social media, are still posting the statuses about how tough their sport is.  How dangerous horses can be.  How hard we work for our passions.

My teenage years were also spent doing this…

And then the Olympics came.  Immediately my Facebook blew up, with an argument going back and forward between them and us.  They said our sport wasn’t that at all.  That the horse did all of the work.  That the horse deserved the medal.  That this snobby hobby needed to be dismissed from the Olympic Games and replaced with a hobby that requires more skill – like beer pong, or needlepointing.

And this has all occurred in an Olympic year where we have witnessed everything that makes this sport great – skill, ability, horsemanship, finesse, and heart.

I turned on the cross country portion of eventing with the intention to watch Boyd, and then write the Materials and Methods of my latest manuscript, and then turn it back on for Clark, and repeat.

But I couldn’t turn away. It was mesmerizing.

The course ate people for dinner.  I watched on abated breath, but not scared.  I hadn’t witness any extreme falls – a la Burghley.  But I witnessed William Fox Pitt have a run out; something I didn’t think I would see in my lifetime. I saw Michael Jung make a line that made me want to vomit ride like it was a grid in a lesson.  I watched a woman from Zimbabwe execute a smart, brilliant, and skilled ride to complete the toughest technical course I had ever witnessed.

But at the end of the day, no one was seriously hurt.  But there were crashes, and there were dramatic moments.

And then I turned on the stadium, anxious to see if New Zealand would finally clinch a gold medal.  And I watched as eventing seemingly appeared to transform into the combined training’s of yesteryear.  The leader board had already  been mangled by the cross country, and then was further altered by mere 4 pt faults for rails.  Endurance had been tested the previous day, and with that came tired horses.  And again, I watched on abated breath as Mark Todd effectively knocked his team out of contention for a medal.

It was devastating. It was emotional.  Like someone had scripted it for a major movie.

And then dressage began.  This horsey dancing that can either entertain, or as my Uncle Bob used to say, be comparable to watching grass grow. But it was BRILLIANT.  Watching Laura Graves and Verdades bring America back to the podium was enthralling.

And I knew that I was abnormal, as most people in the general population would have no clue what a piaffe, or a pirouette was.  This can’t be interesting to them, can it?

But then I realized that no one knew the movements that were being performed on the uneven bars.  No one watching NBC could ride one stride tempis, but hell, I can’t balance on a beam. And while many don’t understand why it is even called dressage, or where it originated, I also have no idea why the hell people needed to learn how to swim like a butterfly.

But, while I had no idea why anyone would swim away from a shark on their back, I still watched.

Because dressage became so similar to, could it be, swimming?

I still cheered for all of them.  So why can’t they cheer for us?

I think the first thing we need to do is to chill for second and think.  Take a moment to reconsider what aspects of the sport that we are utilizing to bring in the fans.  Because all I am seeing on social media is that our sport is both boring, and scary.

I’m pretty sure that I don’t expect Michael Phelps to drown every time he swims.  I also don’t think that Simone Biles is going to snap her neck when she vaults. Those sports don’t need danger, so why does ours? Why is our immediate response to the hate that we will put them on a horse, and they will immediately REGRET ever riding one?  That they will probably fall off, most likely be injured, and heck – maybe even die.

Because I am certainly not watching the swimming, the beach volleyball, the soccer, the gymnastics, or the track because I want to see people be injured, or even die. I am watching because of the skill.

We watch because each of these things were sports that we tried as a child, or a hobby that we entertained as an adult.  We have all swum.  We have all jogged.  We have all attempted a cartwheel, and kicked a ball. But at the Olympics, it is on another level.

And we are cognizant of this because we know how horrible we are at cartwheels.

So I ask all of you equestrians this.  Don’t post on social media about how scary horses are.  Don’t respond to the hate by saying how dangerous our sport is.  Instead, invite that hockey player to the show.  Convince the football team to go to the Grand Prix.  Take your sorority sisters to the races, and convince your boyfriend to go to Rolex.

And more importantly, find your nieces, your nephews, and the neighborhood kids, and go to the barn. Find that trusty lesson horse at your barn and encourage them to all swing up.  Not in  order to scare them, or to prove a point, but in order to show them the basics.

I learned how to kick a ball at the age of 2.  I learned how to swim at that age too.  I could do a cartwheel at 5, and ran track all through college. And I did those things because they were considered safe, inexpensive to do, and a fun activity for a child.  I also got a pony at the age of 2 – and that skill set has held me through life.  It is more than a sport, or a hobby, it is a passion. 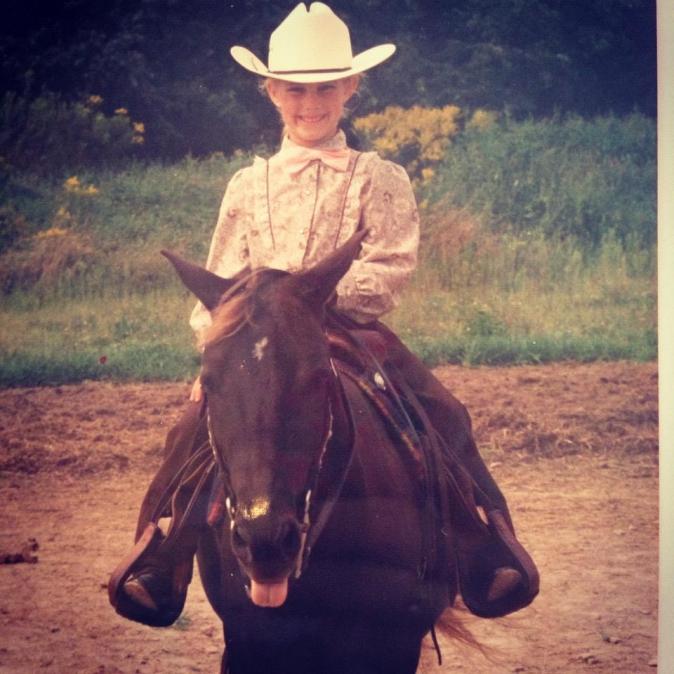 So lets make riding that again.  Encourage children to be around the barn.  Bring equestrianism out of the television and back into the lives of Americans.  Only then will we lose the fear and find the skill in this sport.  Only then will the hate dissipate, and become understanding.  I look forward to that day, and I know the children of our future will too.