“Can you see this bruise?”

These were the messages my girlfriends received most of the last two weeks. And if it was anybody else, any other woman – in this entire world, their responses would have been different.

Instead, I was told the opposite.

Because the man I’m in an abusive relationship with, isn’t a man at all. He’s 1400 pounds of solid muscle, shod hooves, and raging adrenaline.

It’s not my boyfriend — it’s my horse.

And the responses back are the opposite of what I would expect to read.

Instead of being told that I don’t deserve being thrown against a wall, I am asked if his back is sore.  Instead of photographs of bruised arms and battered hips invoking rage or sympathy, I am told to change my bit.  And each time that I write my girlfriends in a rage over being taken off with, or tossed into the air, nose bleeding and hands blistered, I am told that it is my fault – not his.

My face says it all.  Photo by JJ Silliman

And I wonder – why is there this juxtaposition? Why is it ok for this massive beast of an equus to toss me around, when it is so NOT OK for my 180 lb. manfriend to?  Why am I told every day that it is always my fault, and never his, when the opposite would be said if it was a human? If it is never your fault as a woman to be abused by a man, why is it said to always be your fault as a horsewoman?

I posted a humorous status about exactly this on my Facebook page a few days ago.  Explaining this relationship based on abuse, after a long day at the barn where I ended up sore and exhausted.  I wrote (jokingly) that if nothing changed in a few weeks, I would be admitting defeat and someone else could get the bastard.  And I watched as comment after comment was posted telling me how this entire situation was my fault.  How I was doing SOMETHING wrong to ask for the abuse.  It’s not his fault, it’s just yours.

And I started off agreeing.  Just like a woman who had been cheated on, I had to admit that I was warned.  I had been told by his previous lovers and relationships that he was a jerk.  He had never lied to me and tried to convince me otherwise.  Just like a woman who might google a man before entering in a serious relationship, I had done the same – and had found horror stories of his past indiscretions.

He had mugshots and a jail record, and I had known all of this before signing on the dotted line into this marriage of horse and horse owner.

I entered into the relationship as any woman does – believing that I could train him.  Put the seat down, do the dishes, grill a steak, not kill me on cross country — ya know, the basics.

But as all women in the past 2016 years have found, the man could not be trained.

Sure he mellowed as his six pack turned into a beer gut, and his glistening coat got a little muddy.  He let me believe that the improvements were being made, while secretly plotting his future midlife crisis.

This was just pre-midlife crisis 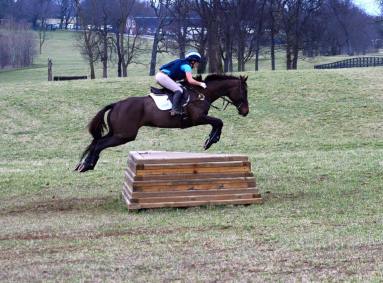 He knew all along that he had me duped by his stunning good looks, his $500,000 salary, and his pristine pedigree.  He lured me in with a few good nights out on the town and a couple of blue ribbons.  He waited, and he plotted, and right when my heart was full and my commitment to him for life secure, he snapped.

And I hung my head, feeling like this was entirely my fault.  I had married the beast, making the bed that I would be forced to lie in.  It was my fault that I was being assaulted on a daily basis, and not his.  He was bred and raised to be this way.  His entire life he had gotten away with these bad habits, so who was I to try to change him?

I heard over and over about how the tough ones are the best, and how they make us greater riders and better horsewomen and men  But I’m also here to tell you that sometimes these tough ones just suck.  They’re cocky. They’re arrogant.  They know how ridiculously good looking they are.  And, at the end of the day, they’re just jerks.

But I’m not a quitter.  I’m not yet filing for divorce. 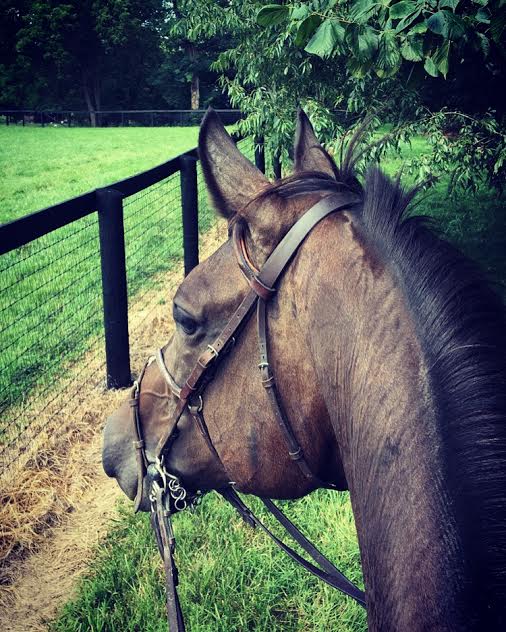 But I did ask him if we could do couples therapy, and he agreed.  So for the next few months, a few times a week, we are going to go to therapy (a lesson), take long walks holding hands (road hacks), and joint bubble baths (bran mashes).  And I hope, and I pray, that we can get this relationship back on route.  We’re going to see if the chemistry that made us fall in love can be reignited, but contained.  We’re going to see if this marriage of horse ownership can be save.  If not, there is going to be one sexy lawn ornament in Lexington, Ky, and one bitter divorcee in me.