Watching it all unfold.

I went through a horrible horse sale a few months ago.  The buyers weren’t honest with both their ability as well as their expectations, and I didn’t investigate hard enough to realize either of these. I went with my gut instinct, and learned that it is not 100% foolproof.

And as I drove the 18 hours to go get my horse and bring him home, I stared off into the distance with tears in my eyes and thought “I can’t do this. Ever again.”

Because I am not a horse salesmen or a horse trader, but I do occasionally sell a horse.  I love taking young horses – specifically ones off of the racetrack – and teaching them new skills that will increase their chances of a useful and safe future. And each time, I warn the potential buyers that I am not here to dupe them, but instead to possibly even scare them.  I want 100% honesty, and 100% transparency.  I want them to love my sales horses on their worst day, in addition to their best.

But this last sale scarred me.  And while it unfolded, I kept reading again and again that all horse sellers were crooked, and how traumatizing of an experience it is to try to buy a horse.  And I sat there, and read the comments, and had to bite my tongue from screaming.

And while I read those comments, I moped around the house, telling everyone who would listen that I was done.  No more horse sales.  No more retraining off the track thoroughbreds.  It wasn’t worth the tears and heartache when it failed.

Because I had a different point of view.  The opposite point of view.  And for all of those unethical and horrendous horse traders and sellers that were being written about, there are plenty of decent people out there just like me. Who just want to give guidance to a young horse, find the perfect owner, and then sit back and watch them grow.

I said this out loud, and my boyfriend turned to me and laughed.

Because my boyfriend reminded me that it goes both ways.  Sure, there might be that one horrible buyer who ruined your view on this passion of yours.  But to counteract the actions of that one, I have gotten to form such beautiful relationships with others.

This became no more apparent than this weekend.  As I lamented over my own financial inability to show, I scoured the online scores both near and far.  I knew that plenty of my friends were showing at the Kentucky Horse Park, while a few others had hauled as far as Morven, and I sat at my lab bench doing my research, trying not to break down at my lack of showing

I focused primarily on the Training Rider division here at KHP, knowing that one of “mine” was attempting this level, with his young rider aboard.  It was both of their first trainings, and as someone who spent her entire young life trying to conquer that level, I shared an appreciation for the nerves, tenseness, and fear that came with this move up.

But I had utter faith in this duo, and was excited for this day.

I got Preston (Prescient: Devil His Due x Dear Phil) almost exactly 2 years ago. A friend of mine from graduate school had messaged me to say that her father Scooter Hughes had this horse, and that it needed a new career.  When I asked the cliche questions (age, height, soundness, brain), she answered each with answers I liked to hear (4, 17hh, 100%, sloth).

Preston at the track the day I met him

I went and saw him at the track, and knew immediately that he was coming home with me.  He was massive and awkward, but was sound on bare feet and had just recently spent 6 months in a field to allow a growth spurt to work itself out.

Sydney and Scooter told me that this had been his primary problem – each time he had gotten going in his training, he would become 4″ butt high yet again, and they would send him home for some time off.  But now — at the age of 4, without a single start, and with more of a lope than a gallop — her father thought it was time to let him go have fun with something else. 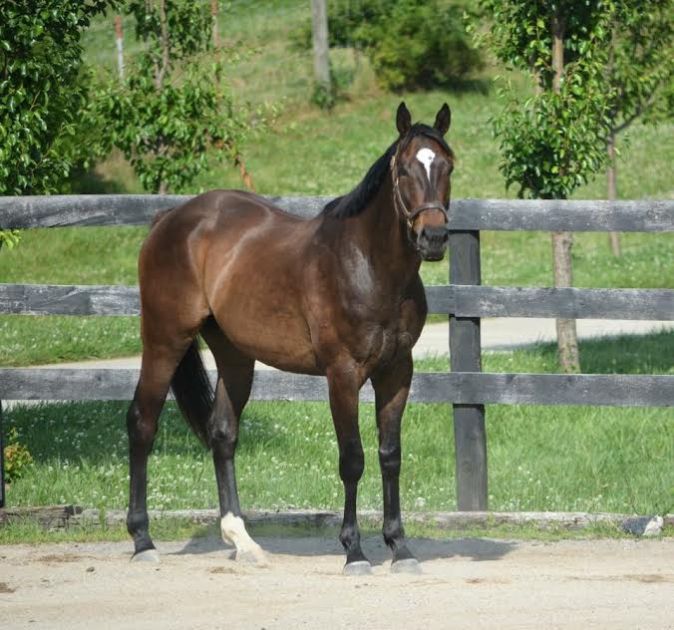 So home he came, for a future with me.

Preston took to his new sport horse life like a fish to water.  Within 2 rides on the flat, he was happily bending and attempting lateral work.  With the knowledge that he was both sound and already let down, I asked him to pop over some small fences, and he willingly offered nothing but calmness and willingness.  Both on the farm, and off, he showed his true colors – and they were a brilliant rainbow of happiness, ability, and the most amazing brain I had ever experienced. 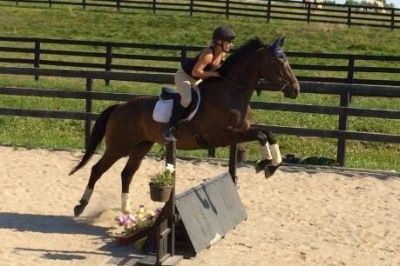 So off we went.  One week after I hauled him home from the race track, Preston had his first XC school.  Loping over logs, coops, and water, his ears perked the entire time. 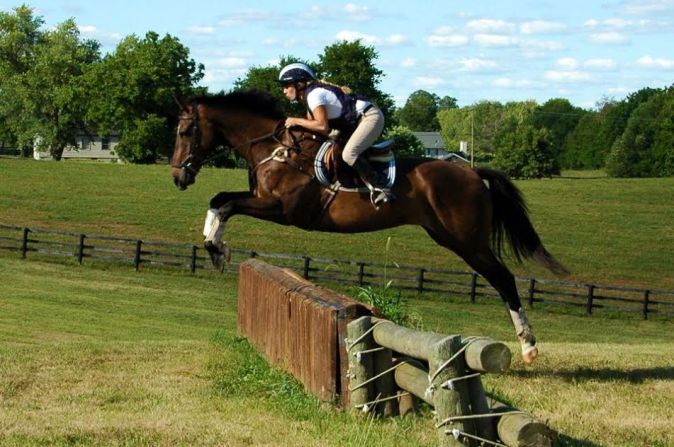 Two weeks after he came home, he went to his first jumper show, and happily tucked his knees over the 2’6 fences, never blinking at the atmosphere or environment. 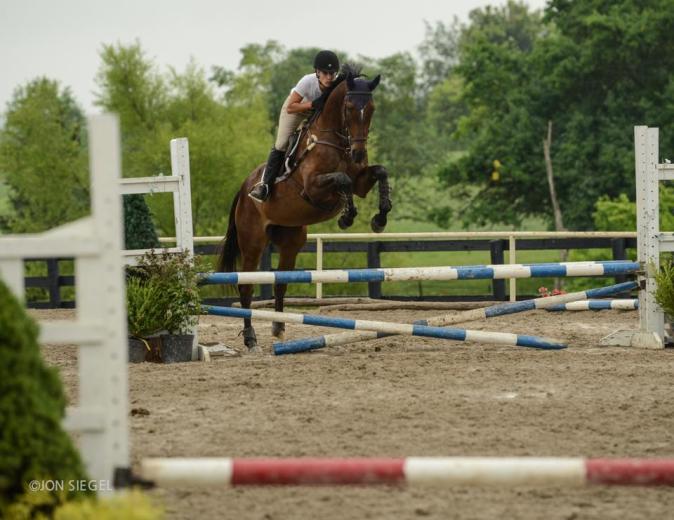 Preston at his first jumper show.  Photo by Jon Siegel.

And three weeks after he stepped off of the trailer, Preston went to his first CT at beginner novice, and threw down a cadenced dressage test and a double clean stadium.  I was IN LOVE. 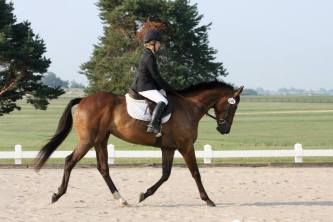 And two days after the combined test, he was sold.

I had never even advertised Preston, due to both the small amount of time I had had him, as well as the amount of fun I was having bringing him along. But a message appeared in my email asking of his price, his temperament, and my availability to show him.  And I laughed as I wrote back the answers, knowing that there was no way that the stars would align and he would sell this quickly.

But I was wrong, and sell he did.

The moment that I saw 13 year old Skylar hop up on Preston and work him through his juvenile paces while chatting with her mother about their expectations, I felt good about this partnership. 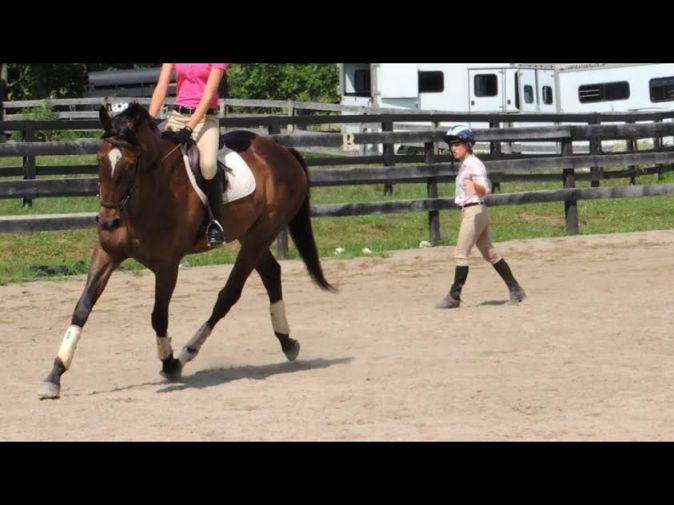 Skylar trying Preston before buying him.

Skylar had competed up through beginner novice on her small horse – but going through a growth spurt herself, they knew she needed a larger horse.  She was young but capable, and more importantly, completely ready to take on the adventures in front of her that come with bringing up a young horse by yourself.

And bring him along she did.

I have gotten to follow their journey for the last two years.  From their first beginner novice where I growled for her at the large table, to warming up at stadium rings when her trainer was 9 months pregnant.  Via text, instagram, Facebook, and others, I have gotten to be a bystander, cheerleader, support system, and a “big sister” to this teenager that I have come to love so much.

And so nothing made me more nervous, and then more excited, than to watch them tackle their first training level this past weekend at the Kentucky Horse Park.

All grown up.  Photo by XPress photo

As I ran to the finish flags, bursting into happy tears and fist pumping in the air, I realized that this is exactly why I do this.  This feeling of joy as I get to watch a horse that I gave a start to continue on into a successful future.  The feeling of happiness as I receive the text message and social media updates from his loved ones.  And the feeling of retrospective awe as I watch these young women tackle goals that I once had myself…goals that “my” horses were now helping them accomplish.

A huge embrace at the end of the course. Photo by JJ Sillman.

So no, I don’t think I will give up.  Someone has to be there to give these horses a solid start or a steady transition, and I know that I am capable of exactly that.  And someone has to be there to make the introductions between these horses and their forever homes.  To hold the teenagers hands as they struggle, to hand the moms a glass of wine as they panic, and to grab the trainers in an embrace as they celebrate.

And at the end of the day, it is to get to watch a life unfold.  With ups, downs, successes, and failures, but also life-altering changes, both equestrian and not.  Because not only has Skylar turned Preston into a successful sport horse, but Preston has turned Skylar into a competent and beautiful event rider.  A young woman.  One with qualities that will assist her through life.  Respect. Dedication.  Determination.  And full of try.

And me?  Well I get to watch it all unfold.  And that makes me so happy.

← Listening to the horse: The story of Mister Marti Gras
Nurse mares, why we need them, and how to stop the production of nurse mare foals: A rebuttal to Last Chance Corral →

3 Comments on “Watching it all unfold.”