Listening to the horse: The story of Mister Marti Gras

A few weeks ago, I received a text message from the owner of Chesapeake Farm, Drew Nardiello.  The many of you who have followed my stories and this blog have heard this name quite a few times – as he has been a pivotal person in my life and my involvement in this industry.

Drew gave me my first job in the thoroughbred industry.  When so many other farms turned me away due to my lack of resume, small stature, and more importantly, lack of connections, Drew gave me a chance.  I don’t know what he saw in me that others didn’t, but I know what I saw in myself.  I was passionate, driven, obsessed, depressed, and slightly scared.  I had faced so much hardship in the previous year of my life, and had felt so much rejection as I tried to scramble myself back onto my own two feet.

I showed up at Chesapeake dejected and angry.  I didn’t understand why I hadn’t been welcomed into this industry with open arms, or why people weren’t begging me to work with their horses.  I couldn’t tell you a shifney from a lip chain, a Storm Cat from an A.P. Indy, or what dictated being by or out of, but I loved horses and was a hard worker.  And somehow, someway, Drew saw that.  And he gave me a chance. 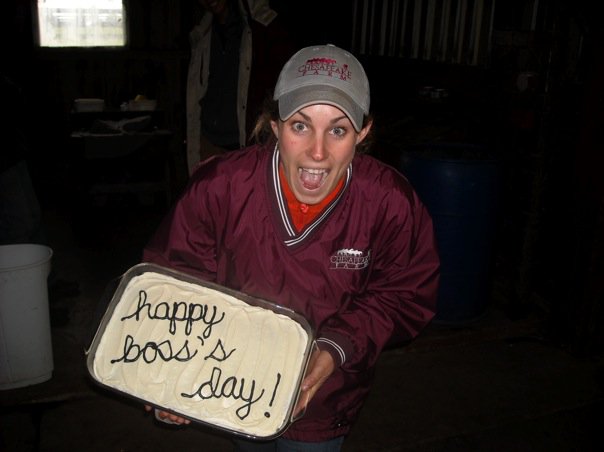 Drew gave me a chance probably because we baked him cakes

For years now, even after leaving my position on that farm, we have stayed connected.  First it was through my relationship with Frank the Tank, and then through the fight we aligned on in retrieving Marilyn’s Guy.  And finally, and most recently, it was in his support of me retrieving Z Camelot from the hellhole of the Borell Farm.  I have learned in the past eight years that nothing is more paramount to Drew than the wellbeing of horses he is involved with.

So when I received a text and saw it was from him, I immediately knew that something was up.  He briefly asked me about how Kennedy (Marilyn’s Guy) was doing, and raved about the pictures posted on Facebook, and then asked me if I or myself was looking for another war horse similar to Kennedy.  His largest client, Robert Lothenbach, was retiring one of his most successful runners, Mister Marti Gras.

March 2010: Mister Marti Gras and Shaun Bridgmohan before the Louisiana Derby at the Fair Grounds in New Orleans, La.

The son of Belong to Me, Mister Marti Gras was quite famous around the track.  He had ran 58 times, won almost $1.2 million dollars, and most notably – was the winner of races like the G3 Ack Ack Handicap and the G3 Washington Park Handicap.  But perhaps more notable than his wins were his 15 grades stakes placings, including the G2 Hawthorne Cup Handicap (twice), the G2 American Derby, amongst others.

So Chris did what any good trainer would, and he listened to his horse.  He put his emotional and financial attachment aside, and kept his ears open.  And he called Drew, the racing manager for Lothenbach Stables, and said it was time.

And thats where I got involved.

Because after Drew messaged me, I began to pound the pavement.  I knew nothing about this horse besides the fact that he was sound, he was big, and he was older.  And I knew that he was an athlete.

After owning two graded stakes winners myself, both Marilyn’s Guy and Called to Serve, I knew that this could translate one of two ways.  Graded stakes winners were either powerful and opinionated enough that that could dominate the field, or they were sound of both body and mind enough to be exceptionally trainable – allowing their grooms, jockeys, and trainers to guide them towards the win.  But I didn’t know which Mister Marti Gras was, so my field of options for his potential owner were limited to those that I knew could handle either.

We needed a soft but strong rider.  A skilled trainer, and someone who we knew would transition a horse with both patience and knowledge.

And I found one.

I ran into Mandy Alexander at our Area 8 Championships at the Kentucky Horse Park.  We were both volunteering, and struck up a conversation.  She asked after my three OTTB’s, and told me of her current lack of a horse.  She had retired one upper level horse, and had recently sold her other upper level mare, and was for the first time in her life without a horse.  She thought that she was ready for this break, as the sport of eventing had changed so drastically from the sport that she loved.  But deep down, I heard in her voice that she wasn’t really ready for that break.

And she said that the retiree was coming home, and she needed a babysitter. And maybe, just maybe, if she found the perfect one, she could be persuaded to ride and compete again.  And I laughed at her, because all of her friends worldwide knew that this horselessness would never stick. 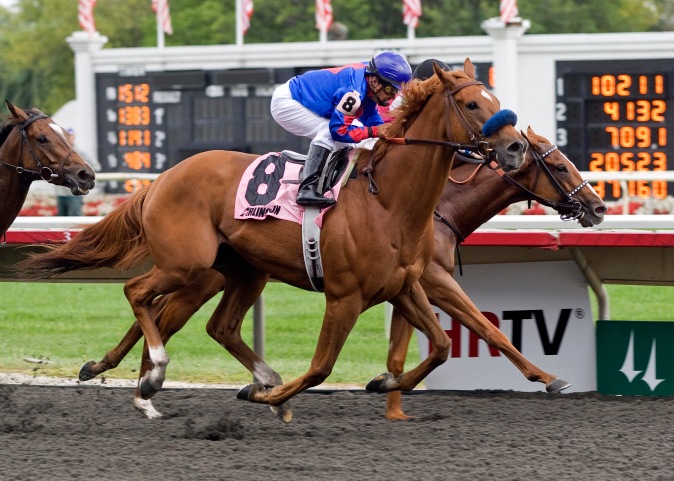 So I told her about Mister Marti Gras.  I showed her his race photos and his record, and I sent her Drew’s number, explaining the situation.

No one can resist foal photos

Mandy went out to Chesapeake to assess the situation, praying and hoping that she wouldn’t fall in love with this creature, only to be dismayed at how quickly she fell.  At almost 17hh, the rich chestnut gelding stood before her with clean legs, a kind eye, and a strong topline.  And quite quickly, and swiftly, her fan base of other horse crazed girls rejoiced as she posted on Facebook that she had bitten the bullet.  The horse was coming home. 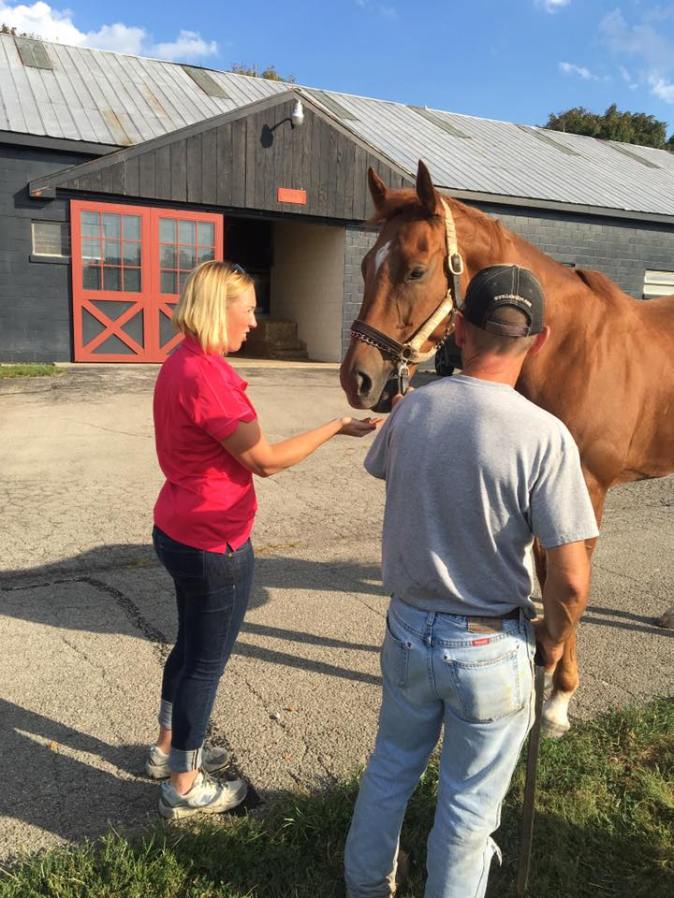 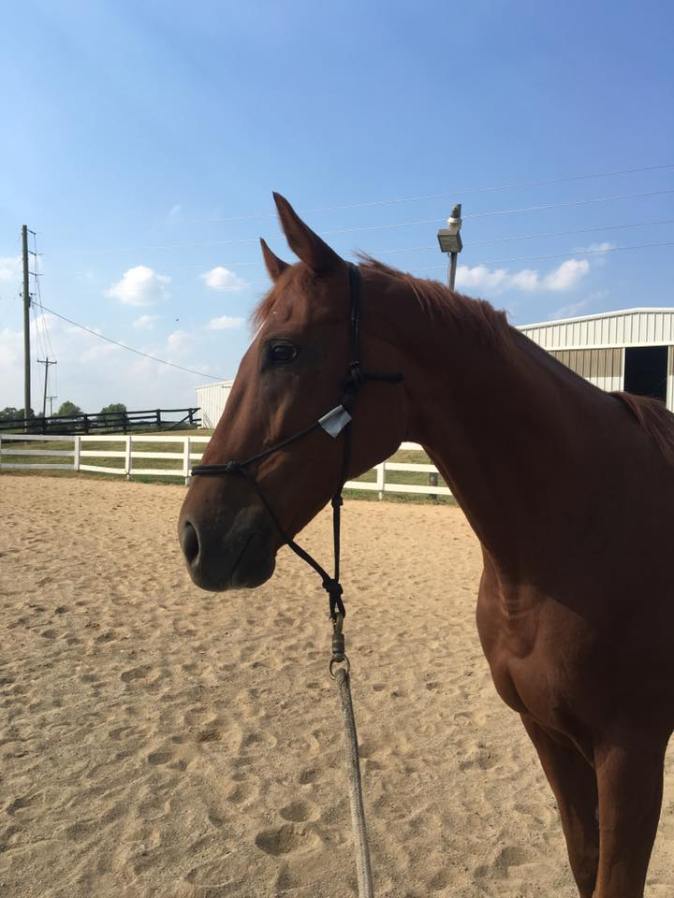 ← A plea for skepticism
Watching it all unfold. →

5 Comments on “Listening to the horse: The story of Mister Marti Gras”