Yesterday was, to many of us, the first show of our season here in Kentucky.  It was the Paul Frazer Memorial Combined Test at the Kentucky Horse Park.  A show that has become a staple to many of us eventers, it is a great way to dust off the cobwebs without adding a recognized score to your record.  With a real show vibe but a schooling show name, it is the best of the best, and has become a favorite of mine over the years in which I have gotten back into the game.

A week ago, and with a late fee, I hesitantly signed up both of my boys for their debut’s into 2016.  For Mak, it would be his first show since his training level move up.  As many of you know, we had x-rayed his leg following this event and had found his splint bone in 4 pieces.  Requiring surgery and 6 weeks of time off in the middle of show season had effectively shattered our plans for 2015, and right when I was getting him legged back up, the eventing season in Kentucky was waning down. The winter was long, and the arena was frozen.  I have gotten the chance to jump him probably 3 times since November, and decided to enter him in Novice instead of Training.  I wanted it to be a confidence building, not confidence proving experience; knowing that I have nothing to prove with this horse.

My last show with Mak, almost a year ago

Nixon is different.  I have gotten to jump Nixon on and off this winter, as I have kept him in full work, and if there was ever a day (this happened often) where time or weather forced me to pick one horse, he drew the short stick.  But Nixon is green.  And I am only an amateur.  I’m sure many others would have entered him in Novice as well, acknowledging that he can step over 3′, but I am not others.  So I chickened out, and I entered him in Starter and Beginner Novice.

Because so many people seem to forget that just 5 years ago, I was going to these shows simply as a groom for my friend.  Dog attached by a leash, with a camera around my neck, I went to scream and cheer, and nothing else.  I had jumped a horse once since turning 19, and spent the majority of my time in the saddle with a rope in my hand, not a crop.  And I hadn’t shown for years.  Why?  Because of something that I am slowly realizing…again…I hate showing.

I tried to explain this to my boyfriend yesterday as we sat at the trailer and I screamed well wishes to everyone who rode by.  He laughed at me and said

He had grown up in the hunter world, and this overzealous happiness and camaraderie was new to him.  He kept asking me if I knew the people that I was calling out to, and I giggled and admitted that I knew only half.  But that this is a part, one of the only parts, of showing that I actually enjoy.

I love that in eventing, I get to see some people that I rarely get to see otherwise.  I love hacking to the dressage complex and having people cross your path and wish you good luck.  I love warming up for stadium and knocking a rail, having it quickly replaced by a trainer that you are competing against.  And I love galloping over a fence and hearing my friends, family, and photographers scream me on.

But I hate so much more. I hate the nausea that I feel in the days leading up to the day of the show.  I hate the restlessness that I feel as I braid my horses.  I hate the pressure that I feel from others when they ask if I have entered, or how it went.  With Mak, so much of this is erased – as the only rat race that I am chasing is my own.  He has never been for sale, and therefore the pressure has been off.  I have never entered him at a level that I feel unprepared for, in fact, my most timid of friends were actually pushing me to move up to Training level, saying that he of all horses was 100% ready.  So with Mak, my goals are simple.  I want an obedient dressage test and willing jump rounds.  Nothing less, but I also don’t usually desire much more.

An obedient stadium round

But Nixon is different.  Nixon has a following.  I take 75% of the blame for this, due to my blogging and his Facebook page.  I never knew of the freak that he would become when I started this. In fact, I had just wanted to use those platforms to describe the struggles and issues that come along with retraining an ex-racehorse of his caliber.  But instead, he proved me and the world wrong, and became the rockstar that he is today.

But whereas the rest of the world is waiting to see if I win, or if I lose, I have my own goals with Nixon, just as I do with Mak. I prepare for the shows not concerned with the color of a ribbon.  My goals with Nixon are much simpler than many would expect: I just want to finish.

I wanted him to jump around stadium in a conversation with me.  I wanted him to stay steady and unphased in a hectic dressage warm up.  And I wanted him to be stronger.  I didn’t want the same comments to be read on our test. I wanted improvement.  Growth.

Yesterday, I trotted into stadium in an almost daze, because I had previously owned an amazing dressage horse, Levi. I knew what it felt like to be winning after dressage and still find yourself at the bottom of the board after a jump phase.  I had been there.  And my biggest fear was that I was sitting on another.  The jumps were only 2’3, and yet as I waited for the bell, my hands were literally trembling.

But I tried to shut out the spectators, ignore the muscles spasming in my body, and focus on the horse underneath me.  Remember my goals. Find the finish line.  And remember that it was Nixon beneath me.  This rebel without a cause who I had fallen so in love with.  This Ferrari with unlimited gears.  This (not-so) gentle giant who had seemingly picked me as his person.  And I urged him into a canter and aimed him at his first fence in the big ring.

He eyed it, hesitated, and then seemingly asked me “Ya, Mom?  We get to jump now?” and then fired away. Fence after fence, he got happier and happier.  He only had one baby stop in either of his two rounds, entirely due to pilot error and a lack of comprehension of which fence we were aimed at. 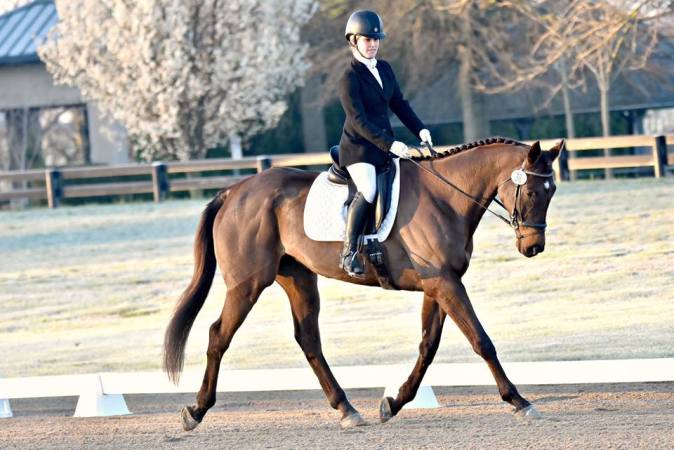 One of my goals:  Not having him behind the vertical. SUCCESS.  Photo by JJ Silliman

Nixon had warmed up in one of the most busy dressage warm ups I had ever seen as a grown man.  Instead of blowing and attacking horses as they bumped him, he canter half passed away.  He stood patiently while his brother was ridden, even if his brother didn’t handle the separation anxiety quite as well (damn you, Mak.)  He loaded to the show, and back to home, like a champ.  He warmed up for stadium like a seasoned professional. And then he went into a very large and intimidating stadium ring and put it all on the table.

A friend of mine messaged me yesterday and told me that she overheard fellow competitors checking their scores and one of them asked who won the BN division and her friend said my name.  The girl responded “Of course she did.”

And when I read that, I laughed.  If my name has become synonymous with winning, then it just shows how quickly your reputation can change.  I haven’t won anything of significance in years.  Mak has always been a solid citizen, but never in the top 3.  My babies have always been exactly that, just babies. And even years ago, my childhood horse had more E’s than $3 ribbons.

This change in reputation proves that just like the mighty can fall, so can the little person rise.  Nixon has obviously come into my life for a reason – and maybe a part of it is this.  To teach me that with patience, time, hard work, and intelligent decisions a horse can change.  To show me what a horse of this caliber feels like, and be blessed with the ability to ride him every day.  To prove to everyone that a free horse can be the most valuable creature in your barn.  And I guess he taught me how to win.  He’s giving me a name. 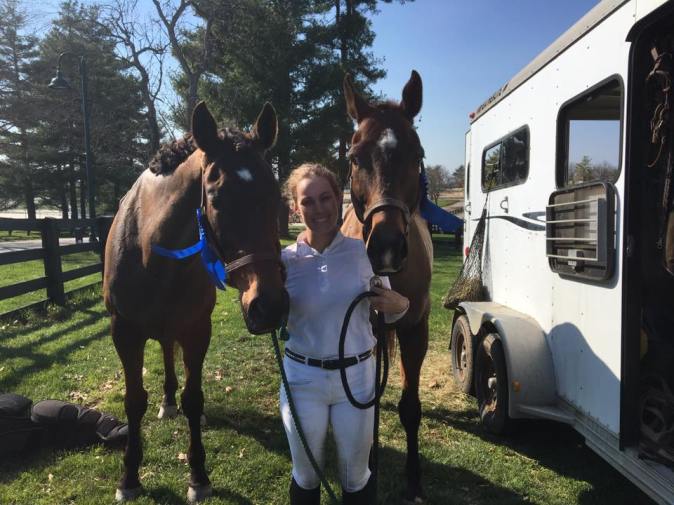 Nixon shared his blue ribbon’s with his brother Mak

But more importantly, he is still teaching me how to handle the pressure of being a winner.  To deal with both the haters and the fans.  To control the anxiety and the nerves.  To live with the constant questioning of your skills and the control over your every move. And more importantly, to not let these things deter me from showing.

And although I am learning these skills, one show at a time, I am still just me.  The girl who screams at random people as they hack to their ride.  The person who gives her ribbon away to the little girl standing next to her at the window. The woman who is never happy with herself, and shakes her head at 1 time fault.  The cowgirl who stares longingly at her Billy Cook every time she reaches for her Amerigo. The girl who loves both of her horses equally, even if one of them won two divisions, and the other didn’t get a ribbon.

You know why?  Because they both exceeded my expectations in my personal goals.  They both rose to the challenge that I placed in front of them, and carried me and my bum arm around a long day.  Nixon might have walked away with 2 blue ribbons, but Mak walked away with a lot of confidence, and made me remember why he is my keeper after all. Because, most importantly, what everyone needs to realize, is that it’s not beating other people that matters.  At least not to me.  Whats truly important is beating your own goals. 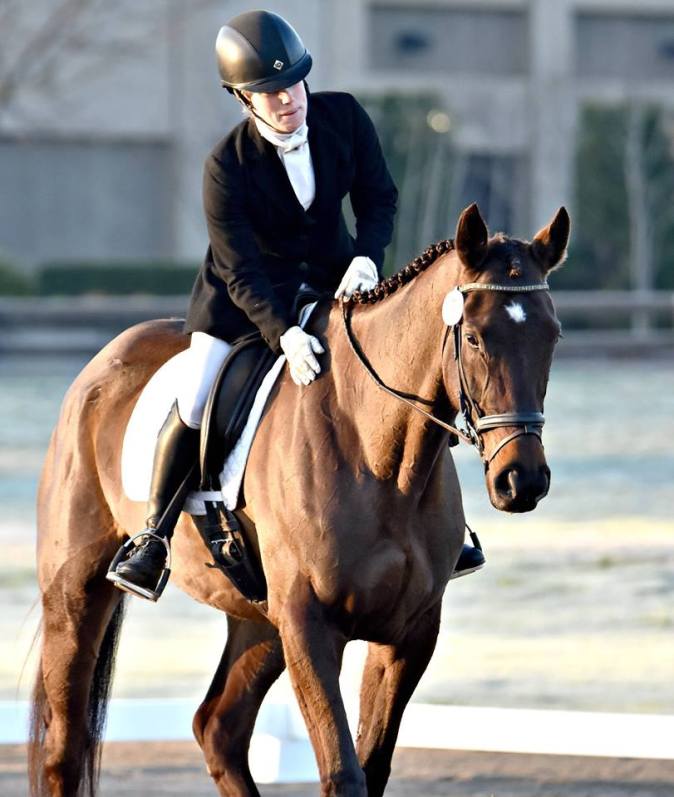 So yesterday, on two horses, I won.  On both.  I accomplished every personal goal, and more importantly, I left the show craving more.  One horse might have walked away with two blue ribbons, but both horses won me over.  My goals became victories, and my expectations became reassessed.  And that is the most important thing.  I hope you accomplished yours too.