A windy path to a unique career

“So when you graduate, you’ll be a vet?”

I am now in the 3rd year of my doctoral degree at the University of Kentucky.  One of the only programs which offers a masters and doctorate in Veterinary Sciences, I started this program in an odd turn of events.  The majority of the students in my labs were veterinarians from foreign countries; countries that truly supported the pursuit of higher education.  Others were in the program after completing a bachelors in animal sciences, and wanting to get to veterinary school, assuming a master’s degree would assist in the application process.  And then even less were like me.  The horsemen.  Farm managers, skilled sport horse riders, passionate horse owners, who had gone into this field because of a passion for a disease, a lameness, an ailment.

Ten years ago, I would have never believed I would be on this route.  I had wanted to be a veterinarian practically from birth.  I was passionate about animal health, I loved working with the animals, and I was fascinated by medicine.  Under the tutelage of Dr. Kelly Johnson, this fascination had grown to an all-out consuming lifestyle.  I spent my holidays from school in her truck.  I spent my summers working on farms and ranches.  I attended a university with a renowned pre-veterinary route.  I worked my ass off, one exam at a time.  And then I failed. From one rejection letter to the next, my confidence in myself waned, and my passion for this field wavered. 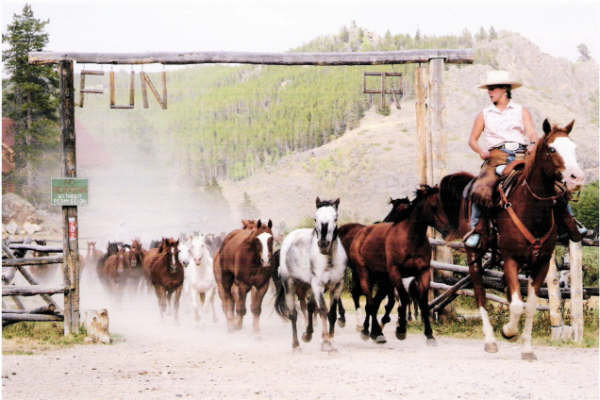 Working on a ranch in Wyoming to gain animal experience

Year after year, I did what the admissions told me to do.  I took that Online Animal Nutrition course.  I increased that GPA.  I worked with research animals instead of companions.  I got a full time job at a small animal clinic, having too many hours with large.  And nothing changed.  The rejection still followed me.  I became embarrassed by a 3.4 GPA.  I became enraged at my undergraduate university, believing its lack of reputation was at fault.  And I began to hate myself.  I was obviously undesirable. The vet school’s told me so.

So I rerouted.  I got hired as a manager on a premier thoroughbred breeding farm.  I found my niche.  I found happiness.  This industry that believed in the upmost care of their horses; the elite medicine of the game.  I met some of the best veterinarians in the industry.  But they all asked the same thing:

“Why not vet school?  You need to go to vet school.”

I smiled as I explained my story.  I laughed as I watched their interns struggle, all the while knowing that something about them had sparked an interest in the admissions committee. Something I thought that I was lacking.

But I slowly regained my confidence.  I increased my knowledge and my skill set.  And I became a damn good farm manager.  The veterinarians appreciated my passion for the medicine.  The lay people appreciated my horsemanship.  But something was still missing.  My scientific brain yearned for more.  So with a push from some of these famed veterinarians, I introduced myself to the Department Chair of the Gluck Equine Research Center at the University of Kentucky; Dr. Mats Troedsson.

I spoke to him of my background, my bachelors in biology.  I explained to him my passion for these diseases that were affecting my personal broodmare band; placentitis and endometritis, infertility and genetic abnormalities.  And as I spoke, I saw him smile.  I realized that I had met a kindred spirit.  He told me of his background in ambulatory medicine, but his passion for science.  He explained that his primary interests were exactly mine: placentitis and endometritis.  We bonded, and I left the meeting feeling like a weight had been lifted from my shoulders.

I began my graduate degree 6 months later, in Dr. Troedsson’s laboratory. Nervous to leave the farm, I was calmed when I found that in the reproduction lab, we worked with horses just as much as a farm manager would.  Still upset by my lack of a veterinary degree, I was amused to find that I would be performing my own ultrasounds, my own palpations, my own minor surgeries. 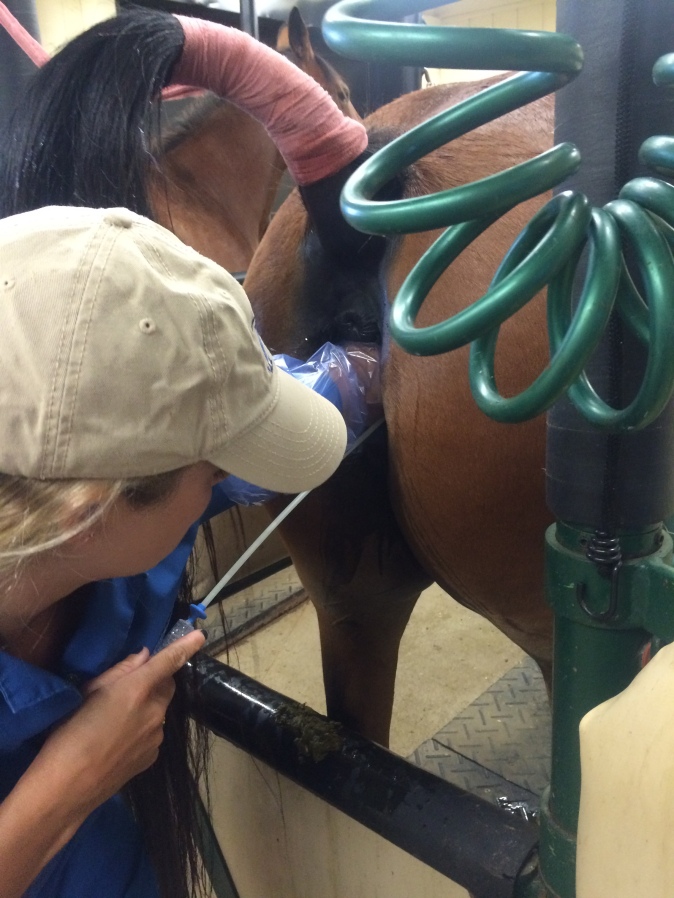 Breeding a mare on my study

My thirst for medicine was quenched, and while I was not working hands-on with clients horses, I was satiated by the fact that my research might affect more. Instead of bettering one, I could actually better thousands.  The University of Kentucky is unique and outstanding in the fact that we have access to hundreds of research animals.  The farm manager in me is content by access to these animals, animals that are cared for just as I would my own.

And although there are still moments of insecurity in my career path, I try to push them aside.  I remind myself that I have gotten to do research on both of my diseases of interest: placentitis and endometritis.  And while the small studies that I have performed may not be ground breaking yet, my new found knowledge of both the physiology behind the disease, as well as in the laboratory techniques that can be utilized to study them, are imperative.  I went from a horse lover to a farm manager, a farm manager to a scientist, and to come full circle, a scientist that specializes in horses. I am finally content.

I now meet so many young students who are either unsure of what they want to do with their bachelors, or are convinced that veterinary school is the only endpoint to a successful career with animals.  And I smile when I meet these people, because I was one of them.  I had no idea that this degree existed.  That I could be a doctor of philosophy in the field of veterinary science.  That there were other options.  I tell them of the pro’s and con’s of this degree.  I explain to them that I WAS one of them, and that although it took a windy road to get here, I am now happy.

I hope to finish my degree within the next year, and can’t wait to have Dr. in front of my name.  This might be followed by PhD instead of DVM, but that’s ok.  I hope that those three letters strike up more conversations with the youth of the horse industry, and that they are intrigued by my story.  That they see something in me that reminds them of themselves, and that they learn about yet another career option in this great industry.  Let my struggle become their gain.  Let my passion for horses have a greater impact than what I ever had believed possible.

7 Comments on “A windy path to a unique career”