The Bully of the Barn: Called To Serve

“A headstrong bully who seemed to have a grievance against the world, he refused to accept instructions or guidance, but instead attempted to impose his will on everybody he encountered, insisting on doing everything his way, in his own time and in his own special style, thank you very much. And if that seems only mildly alarming, add this little detail to the portrait: This recusant maverick, this loose cannon of an athlete, weighed nearly 1,200 pounds.”

These were the words that kept replaying in my head as I drove the windy roads through the Bluegrass on a sunny day in April. I had ran into a good friend, Brent Wilson, at Keeneland and playfully said to him that I was looking for another project as my boyfriend rolled his eyes.  Brent’s face lit up and he said “No way, I just got one in yesterday.  And he’s AWESOME.” He immediately whipped out his phone and showed me photos of a horse that fit 98% of my criteria. Bay, Check. Tall, Check. Sound, Check. Gelded, Check. He was a little bit older than my previous projects, but the age of six didn’t deter me much.  Brent proceeded to tell my boyfriend, myself, and our friends, that this horse was the REAL DEAL.  He had won his farm half a million dollars – winning the G3 Discovery Handicap, as well as placing 3rd behind Game on Dude in the G1 Santa Anita Handicap.  We parted ways after agreeing to have me come out and put an eye on him in the upcoming week.

I left Keeneland and immediately went through my arsenal of horse-stalking capabilities.  Pedigreequery told me that he was a 2009 Afleet Alex gelding out of a Kris S mare that had a beautiful pedigree herself.  Equibase let me know that he had sold as a yearling for almost $300,000 and ran 24 times, with 5 wins, 3 places, and 4 shows.  But unlike my previous projects, I was also able to dig deeper on this horse.  There were actual news articles about him because of his level of athleticism. News articles that went beyond his pedigree, his Beyer, and his connections.  Articles like this one by Gary West that proclaimed Called To Serve to be a bully. A maverick.  A jerk. 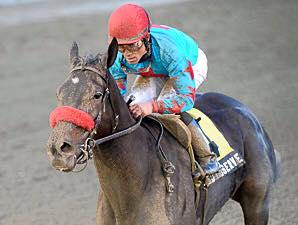 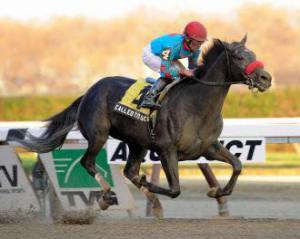 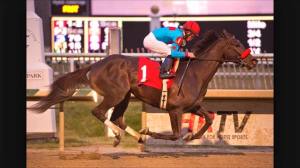 But I knew his connections.  I had heard that Marc Ferrell was a good guy, and I knew for a fact that his farm manager Brent Wilson was.  Brent had given numerous horses to fellow eventers and riders that I knew, and each had proven to be a diamond.  And I knew that these two, Marc and Brent, had loved this horse enough to go out and claim him for $5,000 from New Mexico and then have him shipped home to Kentucky just to ensure their warhorses well being and safety.  He had deserved a lush retirement, and he had loved to work.  They knew that he would need to be retired sound and placed into good hands to achieve both of these things, and thats exactly what they did.

So off to Versailles I went. Driving up the lane to the gorgeous barns of VinMar’s barns, I reminded myself that this horse had already fit so many of my criteria – but one of the most important of which was that I KNEW where he was raised.  I knew that he was brought up with respect and nurturing care.  I parked in front of the barn and strolled into the cool dark aisle way, shook Brent’s hand, and peered into the stall, only to see wary eyes stare back at me.  Called To Serve had only been back to the farm for a few days and was still unsure of his role here.  Was he racing soon?  What was this paddock?  Why wasn’t he breezing at 5 am?  One of the staff slipped a chain over his nose, and brought him out of the stall….and I was taken aback.  This horse was LARGE.  Standing at almost 17h, I could understand why people would be taken aback by him.  HIs shoulder rippled with muscle, his haunches stout and firm, and his head held high.  He knew that he was King. 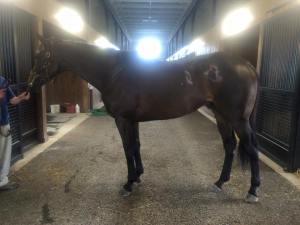 Brent was quick to point out the large flesh wound on his pelvis, explaining that even after the best attempt at getting this warhorse home to them safely, he had gone down in the trailer and scraped the skin off of numerous parts of his body, but most noticeably his pelvis.  But ignoring the wounds around his hips and legs, I was able to just drink in this tall glass of water. He. Was. Stunning.  I quickly asked Brent if he would mind if I swung up on him, and after a giggle and a reminder that he had only been off the track for 72 hours, he agreed that I could hack him around the paddock.

I hefted my saddle over his high withers and slipped a snaffle into his mouth, mumbling in a reassuring tone and patting this beast on his muscular neck, keeping my nerves in check as much as his.  We lead him to the paddock, Brent gave me a leg up, and we were off.  My 5’3 body looked ridiculous on his massive frame, but to him I was just another exercise rider.  I put him through his paces to each direction, with only a *few* interruptions of a few steps of gallop.  And although he was hot, I was impressed.  He offered no buck, no rear, and although he wanted to RUN, he came back to a loose rein and a happy walk.  I was SOLD. Bully, he was not.

As I dismounted, Brent and I discussed this horses future.  I told him that I was 100% interested, but we both agreed that this horse needed some time off to relax, unwind, and press reset on his brain.  I patted Called To Serve on the neck and thanked him for a good ride, and walked out of the barn thinking “Damn.  That is an athlete.”  He wasn’t a bully, he was just strong.  He knew that he was something special, and it had paid off in wins, money, and reputation.  I could understand why people could have grown wary of his towering frame and ominous presence, but I didn’t sense hostility.  I sensed royalty. 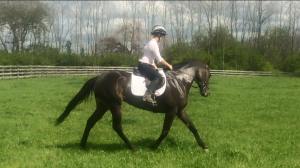 3 weeks later  I got THE text.  “He’s all yours.  Marc has agreed for you to have him.”  I quickly messaged Brent back with a girlish squeal saying “THANK YOU THANK YOU THANK YOU” and then messaged my friends and my boyfriend that I GOT HIM.

Called To Serve is now known around the barn as NIXON.  I have had him for only a few days but I have already fallen in love.  He has demonstrated that his willingness to be urged towards the wire on the track by a skilled jockeys hands is also parlayed into bravery to hack on trails, pass scary objects, and even pop over some small fences.  He settled in so easily, as these traveling warhorses are trained to do.  And most importantly, he has yet to “impose his will” on anyone that he has encountered.  I am so excited to see where this journey with Nixon will take me, but I am so excited to watch it unfold. 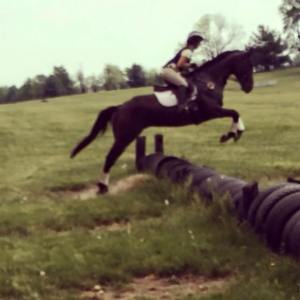 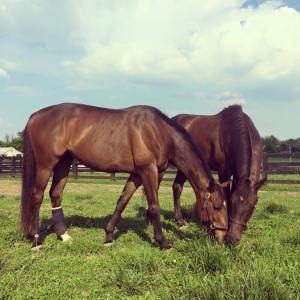 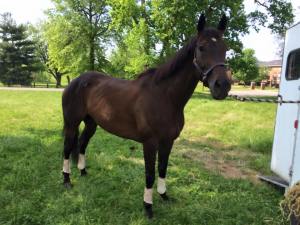 ← Happy Mother’s Day: To The Strongest Women I Know
Little Victories To Most… →

4 Comments on “The Bully of the Barn: Called To Serve”