Happy Mother’s Day: To The Strongest Women I Know

I remember looking up into my father’s eyes and being stunned into speechlessness.  Only it wasn’t an intentional lack of words, but instead my throat literally filled with tension and emotion, making sandpaper out of anything that I could possibly mutter in response.  We were standing next to the football stadium at the University of Rochester; it was the last time I would throw javelin in the NYS T&F competition, and I had just thrown very badly to finish 3rd.  My dad had travelled up from PA to cheer me on, but at the very end, he pulled me aside and asked if we could talk.  I followed him out of the dark tunnels of the stadium, staring up into his broad shoulders, and thinking “what now?”  My entire senior year at St. Lawrence had been such a roller coaster – he had been diagnosed at the beginning of October, and had been back and forward in treatments until February when he received his bone marrow transplant.  But it had taken, and he was in remission.  We were all so grateful.  Of science, of the donor, of my father for fighting.  So what could this possibly be? 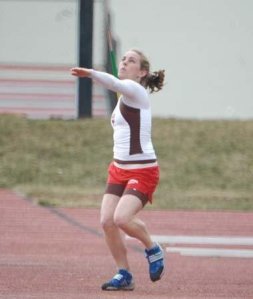 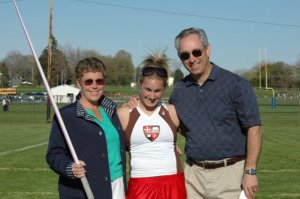 “Carleigh, I went to the hospital last week and they found new blast cells.  The cancer is back.”

This couldn’t be true.  I couldn’t handle this.  I just couldn’t.

“Oh. Ok.” I mumbled back, still so unsure of showing my emotions to my rock of a father.  I looked around, watching as people strode by us, not knowing that on this sunny day in their life, my own world was crashing down.  Suddenly the sandpaper in my throat disappeared, and rage took it’s place.

“Why didn’t you tell me sooner?  You let me come here, throw like shit, and walk around like an asshole while you knew the entire time that you were sick again!”  He apologized, but said he didn’t want it to effect my throwing.  It all began to sink in.  He would immediately go back to the hospital and begin more chemotherapy.  The machines would get hooked up, the jail sentence would begin again.  These last two months, this glimmer of normalcy, was all a sick joke.  He would not get normalcy, my family would not get normalcy, I would not get to finish my senior year without this impacting my life.

This education that my father had so demanded of his children had led me to HIS alma mater; St. Lawrence University.  I was at this championship track meet representing HIS college.  My commencement from HIS dream school with HIS desire to have one of HIS children would all be for nothing, because HE wouldn’t even be able to be there.  I hugged my father good bye, not knowing what to say, and walked back into the dark stadium – staring blankly into the dank and glim walls.  I made it to the section where my team was camping out, slid down against the cold dark cement, and burst into tears.  Grief stricken sobs wracked my tiny frame and I began hyperventilating, not knowing how to breathe in the air of the world that was taking my father from me.  My coach rushed over to me and immediately called for someone to grab my best girlfriends and teammates to come and calm me down – and immediately 6 amazing women surrounded me and held me.  It was the beginning of the end.

Graduation was only two weeks later, and I was devastated to realize that my father would not be attending.  I made it through the days in a haze.  Finals no longer mattered, all that did were my tear stricken hacks on my horse, and rage driven throws on the track.  My mother called me daily and asked how I was holding up.  She told me that although my father wasn’t going to be able to come, that she would be there with the proudest smile on her face.  I began to receive phone calls from other important women in my life – my Aunt Holly, who told me that NOTHING would keep her away from this amazing moment, my sister who said that no aspect of medical school would hold her back from jumping in her car, and my best friend Mindy who was adamant that she would be there – even if it meant missing aspects of her own graduation at Allegheny.  My friends rallied around me at St. Lawrence, lending me shoulders to cry on and beers to drown my sorrows.  We had made it through these 4 years together, we would make it to the end together.

The day arrived and I sat in my chair, staring up at Gunnison Chapel, trying to hold in a plethora of emotions that filled my body.  Happiness at completing such a milestone in my life, sadness at parting with amazing people who had become such an integral part of my days.  Excitement at what laid in front of me in my future, grief at the uncertainty of if my future would include my father. The commencement speaker finished his (her?) speech and the announcement of my fellow graduates names began.  I applauded rambunctiously for my friends – screaming my support, but with each cheer, it became more painfully obvious that there would be a cheer missing for me.

Suddenly it was my name being called, and I stood up and slowly began walking to the stage.  Climbing the stairs, I looked out into the audience, searching for “my section” and the women who were cheering like mad for me.  I finally found them, and happiness washed over me.  I might not have my father here, and in only a few months I would lose my father entirely, but I had these women.

These women who had held my hand as a child, dried my tears as a teenager, and pushed me forward into adulthood. They cheered from 100 rows back, but their support was boisterous enough to be heard for miles.  My mother, who had gone through more in her life than would be expected for 10 lives was screaming as tears rolled down her face, so excited for me to graduate in the very spot where she received her own diploma.  My Aunt Holly who had been such a symbol of strength to me throughout my life, who had become a surrogate mother to me, my horses, and my travels, as I grew up into a woman that I modeled after her.  My sister Katie who had been my role model my entire life, who was the most courageous, powerful, intelligent, and passionate person I had ever known, who had treated me as a best friend instead of a little sister, and who had dropped everything to be here.  And finally, my best friend Mindy, the person who had been “my person” for over 16 years, who had been the speed dial throughout these past 8 months and would journey with me even farther in life.  She was my confidant, my shoulder, my hair puller backer, and my strength.  She had become a member of my family, and was hurting just as much as we were.  On this commencement, I had my women, my “mothers,” and I was so proud. 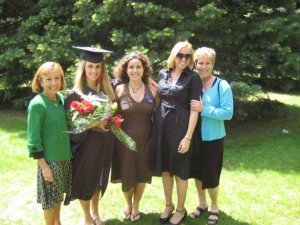 Commencement from college seems to always correlate with Mother’s Day, and on this commencement day of mine, I was surrounded by amazing women who had become such integral members in my maturation  – through life, through school, through good times and bad, and they were all there for me.  I realized as I strode across the stage that although I was missing an important member of my life on this day, I was blessed enough to be surrounded by strong women who understood this pain and wrapped their metaphorical arms around me in love and support – something that not many people have.  I was blessed beyond words to have so many powerful spirits there with me, so grateful to have them and their cheers.

I walked off of the stage with my diploma in hand and returned to my seat, tears dripping down my face, as emotional gripped me.  I sat on the hard wooden seat, exhausted by the emotion, when suddenly my phone vibrated in my pocket.  I flipped it open to see a text from my father.

“I am so proud of you right now.  You have become such a beautiful woman.  You are so strong.  I am sorry I can’t be there.  But I’m there in spirit.”

I turned around and made eye contact with my group, and saw that tears were in all of their eyes too.  But they were smiling, so I started smiling. I might be lacking one, but what I lacked, they made up for in strength.  In numbers. In passion. I hope on this Mother’s Day that you find YOUR women who do this for you.  Who empower you.  Who nurture you.  Who wrap their arms around you when you are struggling.  I know that I have so many in my life.  So on this Mother’s Day, I want to take a moment to thank these women.  My Aunt Holly, my sister Katie, my best friend Mindy, and so many others who have nurtured me into the woman I have become.  And most importantly, my mom Carole.  The strongest woman I know.  The rock in my life.  Thank you all, thank you, thank you, thank you.

← Frank the Tank: The Story of A Heart Horse
The Bully of the Barn: Called To Serve →

4 Comments on “Happy Mother’s Day: To The Strongest Women I Know”