Four years ago, almost to the day, I began dating my boyfriend Luke.  We were both managing farms in Paris, KY and it seemed predetermined for us to find each other – both from Pennsylvania, both managing thoroughbred breeding farms, both slightly obsessed with his yellow lab Bailey – fate took over, and our relationship took off. 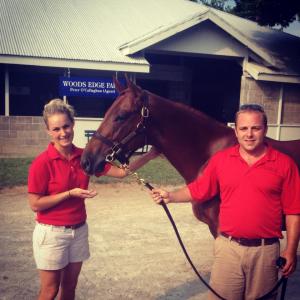 Flash forward four years later, and he has moved from my boyfriend to my manfriend (he might kill me for writing that) or as my Australian friend calls it, my partner. Not much has changed besides the fact that I have returned to school to obtain my PhD in veterinary sciences, but he continues to manage a thoroughbred breeding farm, oh, and I guess we now have TWO lab’s to love!  I spend my free time getting my farm fix on his farm by helping him – I assist with foaling all of the mares, I pull the yearlings manes/clip them prior to the sales, do turn out, come out on most Sundays to help feed, and if I’m feeling extra awesome I’ll help muck stalls (I know what you’re all thinking, I TOTALLY deserve The Girlfriend of the Year award – I KNOW).  So nothing was out of the ordinary when his phone rang at 11PM on a freezing night in February this year.  We threw on our bibs, hopped into his truck, and ventured into the night.

We arrived to the barn and I proceeded to the mares stall while Luke ran to the tack room to turn off the foaling alert monitor while also grabbing the foaling kit.  The mare was well into the second stage of delivery – the front feet were presented with the amnion, and the mare was lying down and pushing – we wrapped the mares tail, reached into the birth canal to check the rest of the presentation of the foal, making sure that he was “diving out” as necessary for equine birth, and then walked out of the stall – allowing the mare to have as natural of a birth process as possible. But nothing happened. The mare stopped pushing and the foal never progressed outwards – and we knew that human assistance would be required and we went into the stall and began pulling.  Rotating left leg, right leg, left leg, right leg, we attempted to dislodge the shoulders from her pelvis to no avail.  We attached OB chains and began pulling with more strength – but still, nothing.  Luke looked at me and nodded his head – our system was well oiled enough that I knew what this meant – he was hooking up the trailer, and I was to get her up and loaded – we were off to the clinic.

The trailer ride was one of the longest, and possibly the coldest of my life.  I offered to ride in the trailer with the mare in case she began having contractions again during the ride, and Luke raced down the back roads of Kentucky in fast pursuit of veterinary assistance.  We arrived at the clinic prepared for surgical intervention, and the vets were sent off to begin to prepare the sedatives and possible anesthesia – but in a miraculous display of human strength and ingenuity, two more strong men added their weight to the chains and attempted one last pull and into the world came BODE.

We all stared at the monstrosity that was the foal in front of us.  One of the interns summed it up by simply stating “WHOA.  Now that’s a big’n.”  He was HUGE, a solid 150 lbs. But there was no time to ogle, the foal was quickly taken to a stall to receive oxygen and other essential nutrients/medications as we all believed that he had been oxygen deprived while being in the birth canal for almost an hour and a half – we knew that in an ideal birth, he would have been breathing within thirty minutes of the mares water breaking!  Luke and I stayed with the mare and the rest of the veterinarians, making sure that she was not hemorrhaging or showing signs of colic – both of which are quite common post-dystocia.  Suddenly one of the interns came into the room and turned to the main theriogenologist and the surgeon stating, “We might need to wait til he calms down to get the catheter in…oh, and I don’t think he needs oxygen.”  I stormed to the stall, wondering how a 15 minute old foal could possibly be “too hyper” for medical intervention – especially a foal that we were certain would be a “dummy foal” and oxygen deprived, and I arrived to the stall and saw it surrounded by grooms, techs, and vets – all staring in and smiling.  I peered around the corner and saw what the fuss was all about – not only was Bode already standing, he was PLAYING. Snorting at the straw, hopping around, and attempting to trot out the stall door, I just knew deep down that any apprehension of this foals survival could dissipate.  He was a fighter. 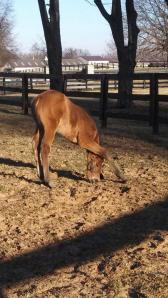 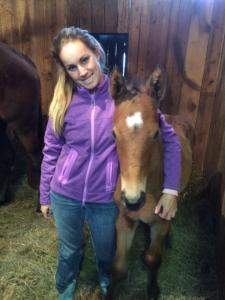 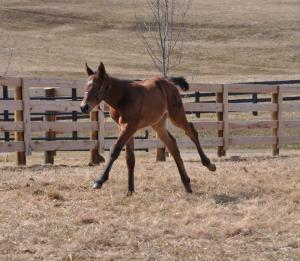 Bode and his mom were discharged from the hospital rather quickly as neither of them appeared to be harmed in any way from the more stressful than normal foaling, and he arrived at Luke’s farm ready to take over the world.  He was a monster of a foal, but quite possibly the most affectionate and loving colt I had ever met.  I admit to helping Luke more often than I had previously, but most of my “help” came in the form of me sitting in Bode’s stall – grooming him, picking his feet, but just loving on him in general. 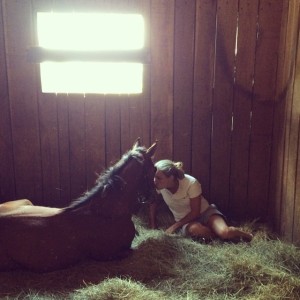 And Bode, in return, loved on me back.  When he was 2 months old, he went through a rebellious streak and I received a phone call from a disgruntled Luke tell me that “my colt” was not letting anyone catch him, and that he was more of a jerk than I let on to people.  I hopped into my truck and drove to the farm, walked out into the field and called out “BODE!” – chuckling as my boyfriend glared at the colt jogging up to me and giving me an affectionate head butt. 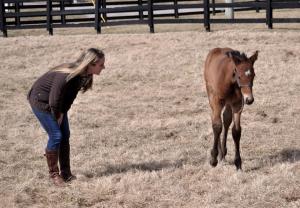 It was determined – we were besties. 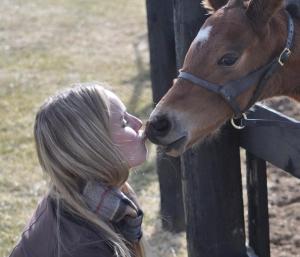 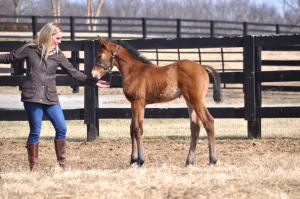 The months rolled on, and Bode blossomed into an amazing, and still quite large colt.  His owner comes to visit him often, usually walking away mumbling “gosh, that’s a good looking colt,” and the owners of his sire visited, letting us know that he was, indeed, a gorgeous foal.  It wasn’t just me – the general consensus was that this foal was COOL. He towered over his playmates, and was put together beautifully. 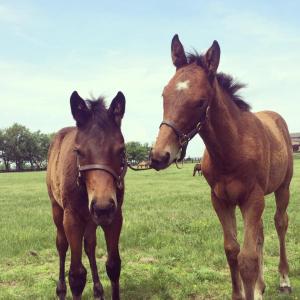 Two weeks ago I was having lunch with Luke when he suddenly got somber and said, “I have something to tell you.”  I stared across the table at him, prepared for the worst with thoughts of illness, infidelity, and other traumatizing ideas when he said the ultimate: “We have entered Bode in the November sale.”

I was completely shocked – first at the information that I was receiving, and then secondly at the emotions that were running through my system.  I used to be a yearling manager, and as part of my job, nearly 90% of the horses that I raised were sold at either Keeneland or a Fasig Tipton sale.  On top of that, I myself have sold quite a few sport horses in the past few years, something that I quite enjoy doing – taking horses off the track and providing them with the training for a second career.  But this hit me like a rock.  I had been prepared for Bode to eventually leave the farm – maybe as a yearling at the sales, or (hopefully) even as a two year old to be broke and run under my boyfriends farms silks – but I had never considered that he would sell so soon.

I understood from an owners point of view why he was being sold.  He is gorgeous, he is well bred, and at this moment in time he is healthy.  Selling horses is a tricky game, one made with decisions of the heart as well as decisions of the brain and the bank.  Not everyone is equipped to handle the emotional, or the financial, gain – and mostly – loss of this game, but most enter in with the understanding that in order to provide funds for the horses that you intend to keep, race, and breed, you must sell some to financially support this – as it isn’t a cheap or a quick process.  Many farms keep the fillies with the idea that they can be bred and continue on the pedigrees of a great mare of the past, and therefore it is usually the colts that don’t make the cut as a “keeper.”  Colts are a much more risky game – as such a small percentage ever make it to the breeding shed to pass on their lineage, and recent mares like Zenyatta and Rachel Alexandra, as well as the more current Untapable, have shown breeders that the girls can step up to the plate just as well as the boys!  This might not be understood by the outside world, but the money that Bode brings at the sales will provide for a lengthy career and future for the smaller percentage of horses that the farm is able to keep as a runner, and eventually a broodmare, providing for their veterinary care, their stud fees, their training, and their management (ie, my boyfriend).  In exchange, we put for sale these other horses and hope that they are nice enough to meet the criteria of the great bloodstock agents, who therefore inform the amazing owners to purchase these horses, and the owners put them in the barns of the trainers like Graham Motion, Larry Jones, or Christophe Clement – among others – the “good guys.”  It is a gamble, but it is the game of breeding and raising racehorses.

So here I am, three months from the November sales, and contemplating this life that I have obtained within this industry.  I have never been this attached to a horse that I don’t even OWN, and I understand the owners decision with my brain, while my heart may take a few years to catch up.  I pray that one of the good guys buys him, and I hope that they are prepared for me to stalk their every move (I say this only jokingly…kinda…not really).  I am also going to talk to the owner and ask if I could put my own personal number on his jockey club papers with a note asking that it be called if he is ever in a bad place or ready for retirement from the track.  Besides those two things, and maybe the handy websites like my VirtualStable and Keeneland Sales results, that is pretty much all that I can do (besides cry myself to sleep and see a therapist, but those are off the subject).  I hope to write a blog in 4 years with the title “I GOT BODE BACK” with my family and friends in a picture smiling ear to ear as I take him over his first XC fence. Until then, I will follow him through his race career, hopefully as an insider – a non-interest gaining partner, but someone that the owners can tolerate via email, but at worst as the person on the outside of the paddock and winners circle surrounded by strangers who wouldn’t know him from Distorted Humor, but with my iPhone taking video and tears streaming down my face.  And to all of you – if you see that person in the next three or four years at the races, put some money on Bode – for he wasn’t just brought into this world as an entity.  He was brought in with love. 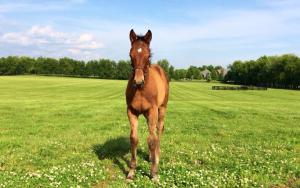 4 Comments on “Loving and letting go…”