A week ago, I was invited to speak to aspiring equine industry members on the topic of communications.

Scientist, I am. Farm manager, I am. OTTB retrainer, I am.

Communications person, I am not.

Yes, I am a blogger. And yes, I got a dual degree from my alma mater-one in both biology and creative English writing, but I felt as though I was a fraud.

Immediately next door to me sat Jen Roytz, and her business partner Sarah Coleman sat downstairs. Together they created Topline Communications, and singularly they were better suited for this talk than I.

So instead, I did what I’m good at. I advised.

I asked the students what their background was, and recommended future careers and goals. I was brutally honest about this lifestyle, and recommended paths away from many of the careers they dreamt of. It was hard. It was blunt. It was me.

And then I got a group of Kentucky Equine Management Interns (KEMIs) in. A group entirely made up of women this year, and a bright group that I always enjoy lecturing too. I had met this group of 30 women in January when I delivered their inaugural reproduction lecture, so they had already been introduced to me and my no nonsense attitude.

I began my talk by giving them a “how-to” in communications as a farm staff member.

Don’t post pictures you’re not allowed to (aka get clients permission).

Check your photos to make sure they have nothing in the background that would indicate poor horsemanship, management, or care of a farm.

Even fly masks make me cringe.

Don’t post any photos of horses with catheters, bandages, or treatments of any kind.

Hesitantly mention the sire, but rarely state the mares name.

And finally, get good at conformation photos-few owners will refuse a stunning photo of their horse that highlights the good.

That was my communications talk. And it took all of 8 minutes out of my 30.

So I moved onto my one-woman show about various farm things. How to properly hold a hickory twitch. Why you shouldn’t give acepromazine to male horses. How to keep yourself safe while scoping a yearling. Why we don’t pull placentas.

Ya know, the fun stuff.

But then I asked them if they wanted to ask me any questions.
One student bravely volunteered and asked me what I thought the 5 greatest issues that the thoroughbred industry faces. And for a solid minute, I paused. It was a hard question, and one that wasn’t an easy list to make. So I started hesitantly, and then grew more passionate as I went.

1. Race Day Medications, an understanding of mass spectrometry, and the scientific setting of thresholds.

2. A National governing body that can set those race day medication thresholds, and standardize the treatment and care of all horses racing.

3. A ((more)) transparent industry that combats untruths spewed about them such as the Nursemare myth that has more followers on social media than The Bloodhorse or The Paulick Report.

4. Aftercare. We’ve made SO much progress, but so many tracks just aren’t getting the hint, or just don’t care. The situation down in Louisiana is both appalling and disgusting.

I had warned this same group of 20 22 yo’s of sexism after lecturing them about the reproductive physiology of the mare in January. I had watched their eyes slightly roll as I told them stories of my own experiences. Fast forward two months and the eye roll moved to incessant chatter about their own experiences.

But unlike what you might think, I didn’t tell them to whine, or panic. I told them to put their head down and do the work. I told them that they would want to cry on numerous occasions, but to wait until they were alone to do so, and then splash some water on their face and get back to their fork.

I told them that so many girls, and then women, had battled hard for them, even if they didn’t realize they were battling. People like Sandy Hatfield gaining stallion management positions, women like Veronica Reed following under her tutelage and most recently running the shed at Winstar.

Women like Mary Stewart, who become the first female in a management position at Claiborne, or women like Belinda Locke, who works her ass off in the position of yearling manager and enjoys the most of her time with the colts.

Women like Carrie Brogden who has shown the mind of a woman in the world of breeding, pinhooking, and sales. Or hell, Liz Crowe, who has done more in only a few years running her own bloodstock services than I could dream of in a lifetime.

In a nutshell, it is possible. Women are out there crushing it.

Does that mean that sexism doesn’t exist? Hell no. It’s there. And it’s strong.

Some farms still won’t hire women. Many didn’t allow women into the breeding shed until only 20 years ago. Clinics didn’t make females partners until about that same time, and many still don’t understand the meaning of maternity leave for their female vets. Harassment is still readily apparent on the backside and at the sales, and was something that Natalie Voss covered so well with Paulick.

But that doesn’t mean that women should run away from this industry.

Because this industry needs women.

From a “Women is Power” movement-they need people who are organized, empathetic, impassioned, and smart.

From a “By the Numbers” movement-90% of the current veterinary school admissions are women, 100% of the KEMI program, and 80% of the UK Ag Equine Programs are women. Women are who WANT to work with horses, so we need to let them.

That is the talk I have given so many of my students as I have lectured at Midway, Georgetown, KEMI, or UK.

You WILL meet sexism. But part of that sexism is believing that we are weaker, more emotional, less rationale, and unable to do the job.

So by being as strong as your counterparts (muck the same number of stalls, carry the same buckets of water, and buck the same number of bales), not bursting into tears (lets be honest, I have seen grown men cry at the track too), and being constantly organized, on track, and with the group—they can’t deny us. 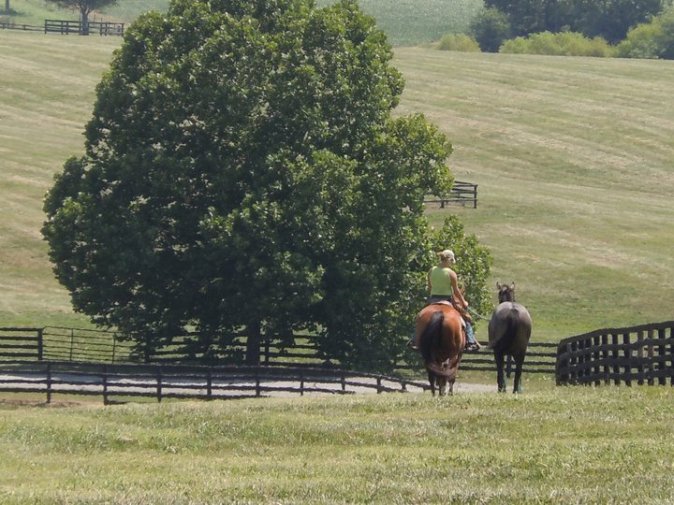 The farms won’t be able to deny that you are capable. And others will see that capability at places like the sales, the shed, and the paddock. You WILL get there. And I truly believe this next generation will.

Times are changing. Minds are changing. And so many amazing women have lifted those bales, choked back those outbursts, and lifted their progeny into this world in order to get us to this point.

The glass ceiling of this business has been cracked, but it needs shattered.

Are you ready to be the one to take that task? 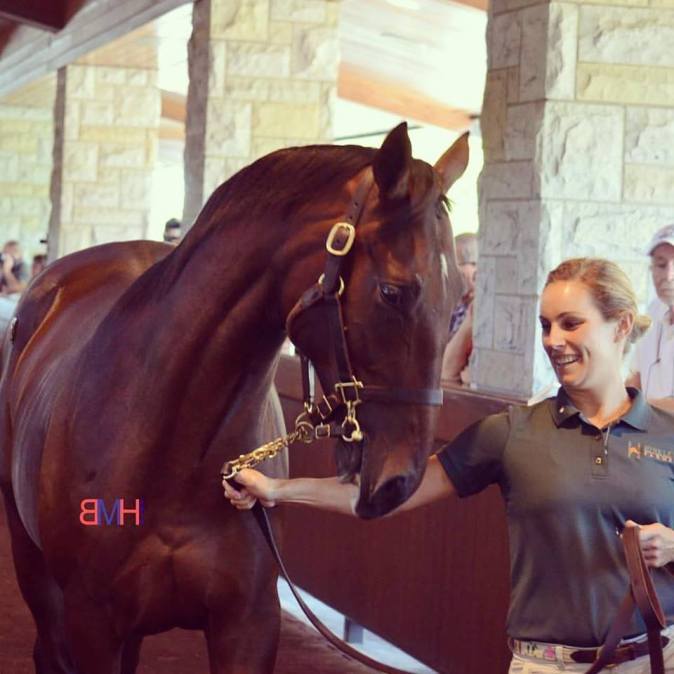 Women and colts: a beautiful marriage. Photo by Melissa Bauer-Herzog

7 Comments on “Shattering the glass ceiling ”