In it to win it

I jumped around my first preliminary combined test yesterday. Of my life.

But what I did have was a severe hatred of showing. A huge pressure to be perfect. And a crippling anxiety of people judging me.

This has held me back in a variety of things, the most obvious of which is my riding. One stop on XC would leave me reeling. Two rails in stadium would bring me into a rage. And if I scored over 40 in dressage? Well that was it, I was done.

Showing had never been fun, and therefore I didn’t show. Last summer I went to maybe 3 shows all together, and had a good experience at all but one. But that one E on my record would leave me up at night. I couldn’t get past it. It didn’t matter that the same horse scored a 20 in dressage at another show, or got me my first level scores for my bronze medal. All I could fixate on was the negative.

And it wasn’t healthy.

So this spring, I made the decision to stop. To stop crippling myself with this anxiety. To stop worrying if people were watching or judging. To stop caring what they thought, or the color of the ribbon, and instead focus on goals that were obtainable.

Surround yourself with good people. Photo by JJ Sillman

I went into the combined test this weekend with simple goals, and commiserated of them with my friend Courtney in the weeks leading up to it. I wanted a steady and well mannered dressage. I wanted leg yields that were clean, and a halt that didn’t pull. I wanted Mak to jump from a rhythmic canter and show minimal hesitation at the 1.10m height. But maybe most importantly-I wanted to fit in.

And Courtney wanted the same.

She was also moving up a level, taking her talented and yet ridiculously fiery mare to her first novice. She was also worried about if she was ready or if her mare would get through the day. And just like mine, her goals were simple.

The diva herself. Photo by JJ Sillman.

She wanted a rideable dressage. She wanted to not clear out the warm up. She wanted her mare to respect the fences, and more importantly respect her. And she wanted to have a confidence building ride.

We talked a few days out and acknowledged that there were over 20 people in the divisions and we just laughed. We weren’t in this for a $3 ribbon. We were in it for the lessons it would teach on the current state of our training, and the homework it would send us home with.

And with that, we loaded up and were off.

And we both made it through yesterday; ticking off the goals as they met us.

Courtney got her mare loaded in under 5 minutes: ✔️

Courtney warmed up without a meltdown: ✔️

Courtney went into her test and had a calm, steady, and gorgeous Harper, even in the canter: ✔️ 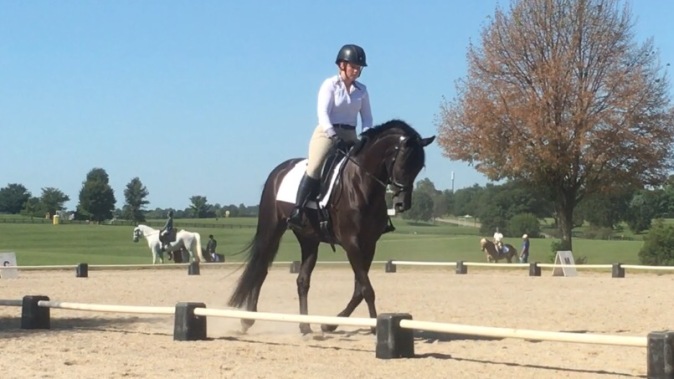 Carleigh got both horses to the show: ✔️

Carleigh got Mak to do simple changes AND a rein back: ✔️

Carleigh got Mak to jump around a 3’6 course without a moments hesitation: ✔️

Carleigh got Mak to jump around a 3’6 course without a moments hesitation because she didn’t ride like a chicken shit: ✔️

And we walked back to the trailers and high-fived each other, acknowledging how successful we had been in our pursuit to conquer this list, and happy to have done it together.

We hadn’t checked the scores, and we honestly didn’t care. The divisions were massive, our ponies were green for the level, and yet our smiles were wide.

We untacked and cooled down. Iced and drank a water, and then went to pick up our tests. And as I walked to the show office, a fellow competitor told me that there was a ribbon. I looked up at her and congratulated her, and she laughed and said “no stupid–YOU have a ribbon.”

In confusion I smiled at her and kept walking, unsure of what she meant. Until I got to the show office and checked the scores.

I had finished 4th in my first ever preliminary combined test. On a dressage score of 32. I’m pretty sure there was bourbon in the judges Diet Coke, but I won’t complain. And then I looked higher. I had also finished 2nd in the training level combined test.

And maybe even cooler? Courtney had won her move up to Novice on a score of 27. Out of a huge division, with a double clean stadium to boot. 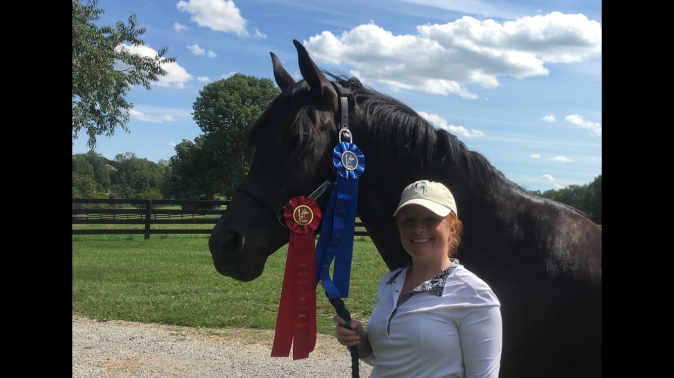 It had been a good day–in so many more ways than one.

And yet as we texted back and forward last night talking about our rides and sharing videos, neither one of us acknowledged the ribbons.

Because we couldn’t care less what color hung from our horses halters at the end of day. We wouldn’t care less if people were stalking the scores or disagreed with the judge. We only cared about our metricable success, and the goals we had not only accomplished-but conquered.

And it’s about accomplishing your goals. The smallest, most minute, to the greatest and largest. Because that’s the only way to win it. And I’m in it to win it.

← The Horse I Couldn’t Quit
The Dark Days →