A year ago today, I loaded the love of my life onto a trailer for his new home.

Mak in the hunter ring. Photo by Anne Gittin

My gut instinct told me that these were good people. And for the first time, at least in regards to horse sales, my gut instinct was wrong.

Less than a month later, I got the call. It ranged from telling me that my horse was falsely advertised to lamenting about teenage behavior.

They tried to tell me that my horse was sold to them lame, even after he had undergone the most extensive pre purchase examination I had ever been a part of. They asked me if I had sedated him for the trial ride, even after pulling blood for a drug test.

And at the end of the conversation, they ask that I take him back.

I walked into my living room with my phone on speaker, and stared at my boyfriend as tears streamed down my face. And my boyfriend simply took the phone from my hand and glaringly stated that we would be at their farm the next day.

My tears were driven by a range of things.

Feeling as though I had somehow falsely advertised him–was he actually harder to ride than I thought?

Feeling frantic at having another horse back–as I had sold him because I couldn’t adequately pay for two.

Feeling betrayed by buyers who falsely represented their goals and their experience–as I later learned this horse was bought to heal a fractured relationship between a teenager and her mom. 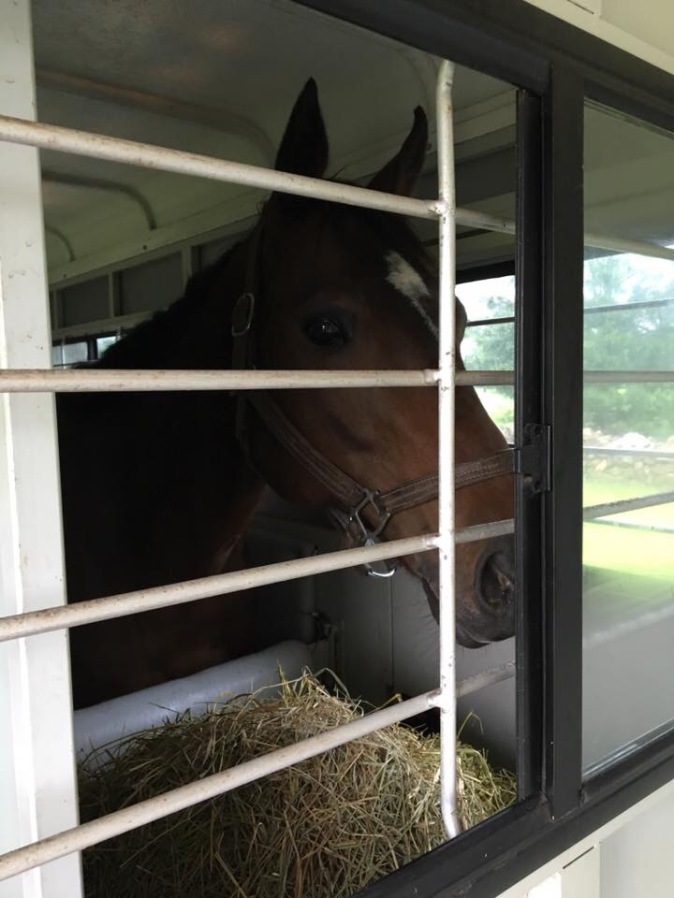 Mak came back from Virginia relatively unphased. He was a couple of pounds lighter and bursting with skin disease, with thrush in all four feet.

For my own sanity as well as legal purposes, we had a post purchase examination done. One of the top sport horse vets in the country came out to investigate, and left the farm with the statement that this horse was sound and ready.

I was to carry on.

So carry on I did.

Carrying on with eventing. Photo by JJ Sillman

And yesterday, in front of the largest crowd he will ever be ridden in front of, Mak walked into the Rolex Arena and demonstrated that he was still the best off the track thoroughbred that Kentucky has ever bred.

I had been at the Kentucky Horse Park early that morning to braid a pony for a friend. The Pony Clubbers had the duty of carrying the flags for each of the nations represented in the competition for closing ceremonies, and needed to look like Rolex ponies themselves.

The pony I was initially there for. Making him look beautiful. Photo by JJ Sillman.

And I sat in the stall while chatting with a tiny red head standing on the other side of the door. A girl who was in charge of this herd of Pony Clubbers and their ponies. A girl who had become a dear friend in the past year. A girl who had been the agent for the sale of my heart horse.

A year ago Courtney had heard about Mak and reached out to her husbands family to come try him. She had acted as agent during the PPE, and hugged me as I watched him load up and leave.

But then, three weeks later, she had held my hand as I sorted out his retrieval.

Courtney had watched the sale fall apart and had been the second phone call after the request for retrieval. She had offered to help me go get him. And she had watched the last year unfold as I regrouped with him.

She knew I had been honest. She knew I had sold her family a good horse. And at the end of the day, she knew that she had met a good person. A horse sale may have failed, but a friendship blossomed in its place.

And as I braided, we chatted. Giggled about random barn gossip, and awed as we watched videos of the XC rides the day before.

I finished my braids, and she convinced me to walk to the morning jogs. But we made it no farther than 10 feet before encountering a problem.

One of the flag ponies was lame, and one of the Pony Clubbers was in a pinch.

I thought about it for no more than a few seconds and quickly offered up Mak.

The horse who had been returned to me for being falsely advertised. For being too hot. For being crazy.

Because I had had a year to regroup, and a year to process. And I knew none of those things were true. I knew he was the safest horse I owned. And I knew that no other horse would become trained to a flag, an audience and immense noise, as quickly as he.

So in under an hour we had Mak bathed, braided, and at the Kentucky Horse Park to tack up.

It was a massive fray of excitement and enthusiasm his young rider Keely grabbed my saddle to clean it, my dear friend Alyssa jumped on a bucket to braid, and I ran frantically around to detangle his tail and polish his feet.

Mak and Keely heading to the big ring!

I told Keely that she would be fine. To stay out of his face, and when in doubt, to add leg.  I told her that I didn’t think he would mind the flag, or mind the crowd, but that he might fixate on the jumps. He loved to walk, but he didn’t always love to stand still.

And at the end of the speech, we gave her a leg up, and off we went. 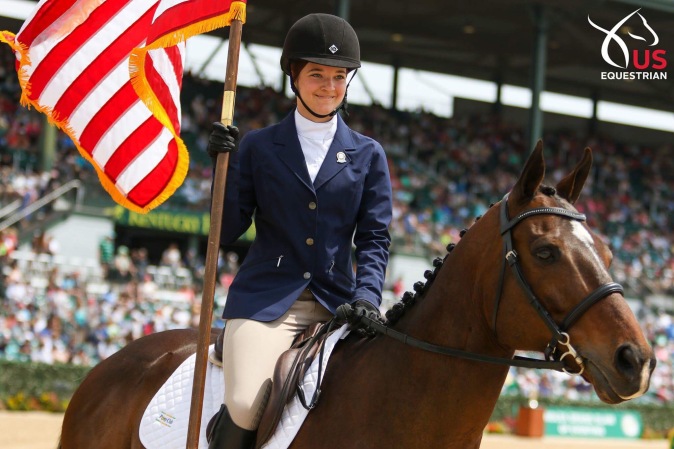 An hour later, Mak marched into a sold out Rolex Arena with a rider in the irons that he had never met. He carried the American flag with pride–with gusto–and pranced around the entire circumference of the arena with his ears up and his eyes proud.

As they announced the American riders one by one, the crowd rose for a standing ovation and went wild. And Mak, the “crazy” and “hot” off the track thoroughbred just held his head high and continued his strut.

It was one of my proudest moments as an owner. As a horse mom. I wasn’t even in the tack, but I was so proud of my horse.

And I realized something at the end of it all. Life happens for a reason. And while it will constantly throw you lemons, you can always make lemonade.

My lemonade is made up of a few things:

I have an amazing friendship with Courtney–a girl I only met a year ago. A girl I wouldn’t have met without the sale of this horse. She went through one of the most difficult journeys of my life by my side, and stuck by me even when “her team” became divided from mine. She has become one of my inner circle, and one of my biggest supporters, and I see her friendship as one of the most amazing takeaways from this experience.

I became stronger with my boyfriend. Luke showed me through this journey how much he was in my corner. He drove 18 hours in one day to go get Mak back from Virginia, and then helped me cover his living expenses as I finished up this doctorate. He showed his true colors in a stressful situation, and threw everything to the side to help me and my horse.

And finally, I have my horse. He showed his soundness, his talent, and now his sanity for the umpteenth time yesterday. A horse that is truly one of a kind. Athletic enough to run training level in a few weeks, with a preliminary move up hopefully in our future. Brave enough to march into the Rolex arena with a flag flapping over his head.

I have my horse. Photo by JJ Sillman

And sane enough to trust to put a young rider on him that he has never met.

I am so blessed.

And most importantly, I learned that my horse is one of a kind.

He showed the world that a thoroughbred is sane enough to march into a high stress scenario and hold his own. He showed a group of young Pony Clubber’s that the catch ride aspect of their ratings are there for a reason.

And he showed me that he is the best. The bravest. The strongest. The most resilient.

Yesterday, we made lemonade out of our lemon of a horse sale. And it tasted oh so sweet.

With Keely and the best OTTB to ever exist. Photo by JJ Sillman