Winning even when you’re losing

I left the ring with a huge grin on my face, and signaled my student with a thumb’s up as we made eye contact.

Big pats at the end of stadium. Photo by Claire Seals.

I knew she was nervous about my reactions – as four of those pesky sticks had come down during our round.  And for a horse who rarely has ONE rail, nonetheless FOUR, my friends were on abated breath to see my reaction.  Four rails is a lot. Four rails effectively puts you at the bottom of the pack. I had lost.

But where they expected tears, I was all smiles.

Sure, I should have kicked instead of picked at two of those verticals.  Sure I could have helped my horse over that first oxer that came down.  And yes, I could have gotten him 6 inches deeper to the last.

And I know, four rails seems like a lot.  Sixteen penalties added to my score dropped me firmly into second to last – only beating a rider who had fallen off.  But that didn’t take the smile off of my face as we sauntered back to the barn.

I was the happiest loser in the barn, and truly considered the weekend a victory.

Because I had started this year by demanding that my student set realistic goals and stick to them.  And in response, she asked that I set my own.

The goals would fluctuate based on the show, the climate, the horse, and the funds.  But we asked each other to set goals that we could at least moderately control.

For Kennedy it was simple:  this was his second real show, and I wanted manners. I wanted relaxation and obedience.  I wanted our walk/trot transitions to be smooth and our circles to stay round.  I knew that he loved to jump, and had very little concerns about the stadium portion – but for an almost 18hh horse, dressaging is hard.  So our goals were mostly set towards that phase.

Dressaging is hard for the Elephant.  Photo by Claire Seals.

For Mak is was different:  he was a seasoned veteran, but one who had taken a backseat to his younger brother for the better part of two years. When funds were limited and time was short, Nixon drew the exercise stick and Mak stayed out in the field.  But now was his time, and I had more specific goals.  I wanted a dressage test that was rideable.  I wanted him to make the minor adjustments asking for those incremental 0.5 points without fuss.  And then in stadium, I wanted a relaxed horse that stayed in front of my leg.  I wanted forward motion, good distances, and a lack of hesitation.

Kennedy warmed up for dressage in fussy form, and we did not come out victorious of any of the goals that I had set in the sand box.  And as I shrugged my shoulders while making a grimace to the judge, I began to wonder what I had done wrong, and how I could fix this.  He had never been fussy, but spent the majority of his test flipping his head – effectively turning his mostly sedate Elephant self into a self-proclaimed Giraffe.

But as we wandered back to the barn, my friend Caroline reached for the rein and sighed.  Kennedy’s noseband had somehow pinched his cheek and created a blister – one that was now bleeding. His anger and resentment to the contact had nothing to do with baby moments and moreso to do with pain.  So I took a deep breath, cleaned the wound and put some calming salve on it, and found my figure 8 for jumping.  A goal maybe not completed, but with a valid excuse.  I knew that our dressage score would be fairly miserable, but was excited to move onto the fun stuff.

Next was Mak’s dressage test. Mak had never been a tiara-weilding DQ, but when he was relaxed and listening, he could hold his own.  And as I warmed him up through the paces, my smile grew.  I felt a Mak that I usually only felt at home, and knew that we would be able to put in a good test.

But I knew that if I relaxed too much, or went into my normal fetal position, that this beautiful warm up would disintegrate instantly.  I brought my chin up, pushed my shoulders back, and forced myself to RIDE.

And ride I did.  I finally got through an entire test on that horse without shutting down.  When he pushed his shoulder in, I asked for it to move back out.  When he resisted a transition, I used well practiced aids to ask again. And when he grew tired and bored in the sandbox, I was able to reinvigorate him with my seat.

We left the arena in smiles, and felt proud of 90% of the movements within the test, only to see a score pop up that was about 6 points higher than I would have judged it, and realized that yet again, we were firmly in the middle of the pack. 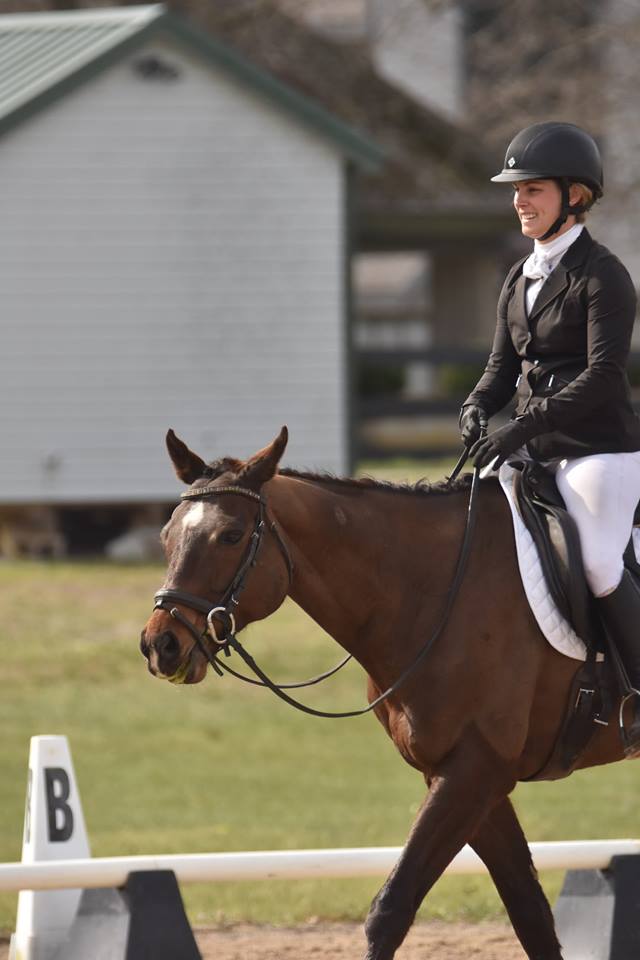 Huge smiles for me.  Mak is just happy its over.  Photo by JJ Sillman.

But I didn’t get sad.  Because as I had stated to my student – we were setting controllable goals.  I can control my aids, and I can control my seat, but I can’t force the judge to wear beer goggles.  I can’t bribe the scribe to turn 6’s into 8’s, and I can’t fudge the scores online.

So my 38 might not have made anyone else whoop and holler, but it sure as hell made me smile.

We moved onto jumping, and as expected, Kennedy was a phenom.  He has really turned into a packer over fences, and just exudes ease.  Like an old equitation horse, he finds a distance, has a lead change, and just guides himself to the fences.  But I had never ridden him in that large of arena or that big of a setting, and therefore the ease with which he handled it made me smile even larger.  Today was a good day.

He can do this with his eyes closed.  Photo by Claire Seals.

And then they set the fences for training level.  This show is the first show for many of us eventers here in Kentucky, and most of us use it to brush the dust off of our winter-weary bones, and the organizers set the courses as such.  But not this time. This time the fences were a maxed 3’3, with spreads that gave me anxiety.

And that is exactly what I did. 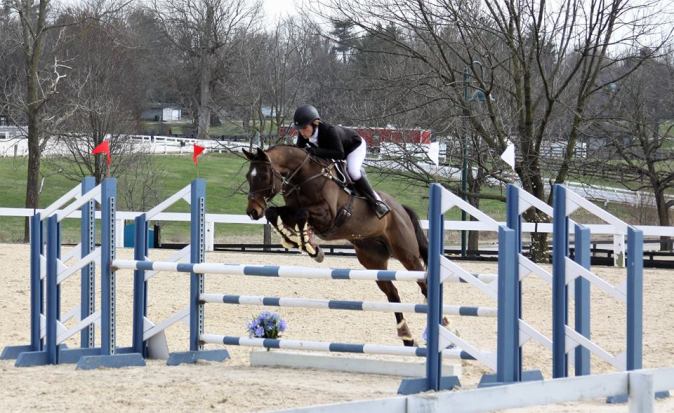 The fences were scary, but Mak had my back. Photo by Claire Seals.

I went into the ring with a larger than normal canter and just tried to support Mak as much as I could.  I attempted to give him help when he needed it, and stay out of his way when he didn’t. And although I heard rails fall from tired legs and an exhausted horse who had sat all day during the first hot day of the year, I didn’t feel any hesitation.

And. That. Was. Awesome. 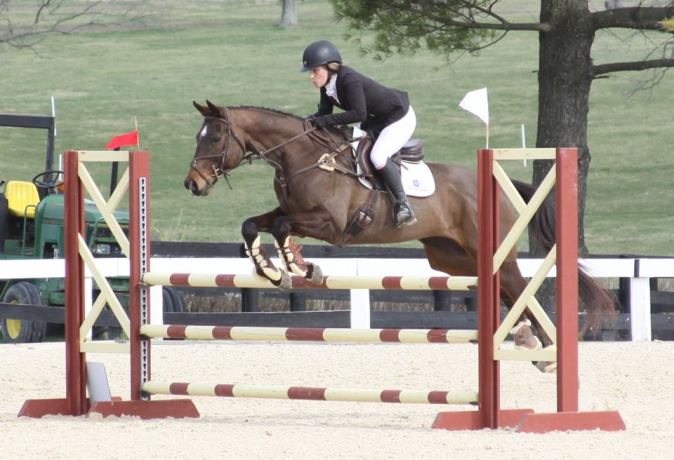 My new tradition with my student Claire is to force her to list three things that she is proud of and three things that she needs to work on at the end of a show – attempting to keep it into perspective and not just have “WE LOST” or “WE WON” feelings.  And as we headed back to the barn, she asked me to do the same.

I told her that I was upset at myself for picking to the verticals, but proud of Mak for continuing to stay forward even after I had made that mistake.  I told her that I should have rode deeper into my corners, especially up to a massive oxer that I winged to – thereby having Mak drop the rail with his unbalanced hind end, but that I was proud of myself for continuing to ride even as I heard the rails falling.

And mostly, I was proud of myself for finally setting some goals, sticking to them, and not letting others opinions change them.

Kennedy finished 12th out of 14 horses in the starter division, and Mak finished second to last in the training, but I was ecstatic.

We didn’t even earn a ribbon, but both horses earned respect.  And for the first time in a long time, I feel like I am actually riding.

And I know that the keyboard warriors might be looking up the scores and going “Oh wow, Carleigh had 4 rails on Mak, she must have ridden like crap” or “That horse should NOT be doing training level right now.”

I know that the expectations are high, and the behind the scenes judgement is real.  But as my student put it on Saturday – it is as though every one else has higher expectations for me than I do for myself. And my opinion of myself, and my riding is all that truly matters.

I didn’t let the lows get me down, I didn’t let the rails set me back.  I never once went into the fetal position, and for the first time in a long time, I didn’t care about the expressions on others faces as I left the arena.

Because this game is a competition against no one but yourself, and on Saturday, I finally felt like I won.

Onto the next. Photo by Claire Seals.

← The Shuttle Show
The Good Ones →

9 Comments on “Winning even when you’re losing ”