I was once told that I was anti-racing.

That because I was a part of the second career movement, I obviously didn’t respect the first. That because I believed in not pushing for one more race that I didn’t cheer for the twenty before it.

And that it, just simply, wrong.

I won’t lie and say that I don’t respect the second career.  I do. And why?  Because in most cases, it is the most lengthy.  The average horse runs for 2-3 years and then has only a few options. To be bred?  Turned out?  Or retrained. And if the average horse lives for 20 years, another 15 are going to be spent with that second choice.

But that doesn’t mean that I don’t respect, love, and appreciate the first years of that thoroughbreds life.  I used to be the one that woke up at 2:17am on a 20 degree night in February to deliver them into this world.  My black lab puppy was the first friend they encountered after drinking their first drops of colostrum.

Woodford and a foal.

I was the one who taught them what a surcingle was, and how to walk with those weird fandangled polo wraps. I was who taught them to stand on the scale as we measure their growth and progress, and who hand fed sweet feed to convince them that it was just as delicious as their pellets.

Taking them to the ring.  Photo by Melissa Bauer-Herzog

And I was the one who walked back to the truck after loading them up and sobbed quietly.

I acknowledged that it was up to me to set these horses up for future success – and in my mind, that was as both a racehorse and a sport horse.

If I kept them safe and growing strongly, they would blossom into beautiful yearlings.  Beautiful yearlings received interest from the good guys, and were more likely to end up in their good hands.  The good guys broke them slowly and trained them well, and their chances of winning a race were much greater.  And their race record could then pad the sales page of their mothers – mothers that I adored and was still watching pace their stalls as they waited to deliver their next foal. 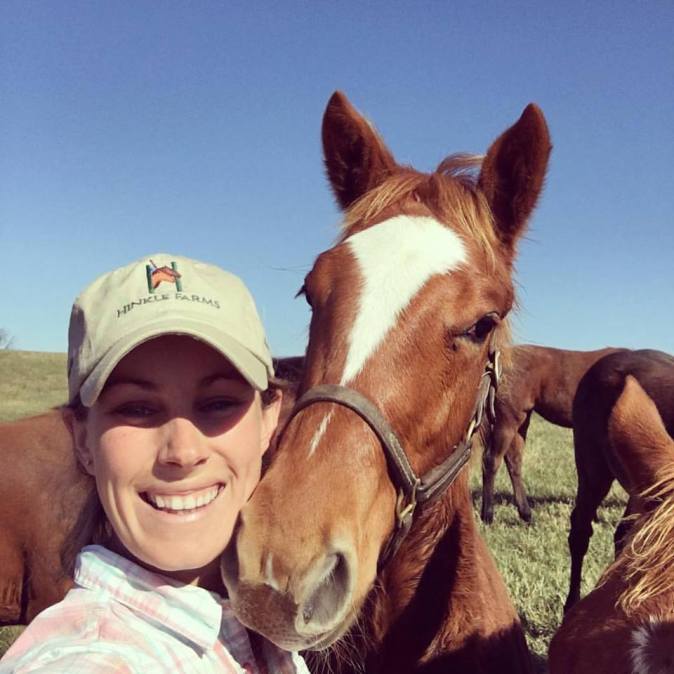 The Cycle: The first foal out  of Hit Girl, a mare that I had as a foal.

And because of one horses success, the future foals out of those mares could be just a little bit safer.  A little bit better.  If she produces just one graded stakes winner the other progeny would receive those looks, make those long lists.  And as long as I could continue doing my job of bubble wrap and preparation, that look could turn into a short list, and maybe even a purchase.

It is a cycle.

And at the end of the cycle, the race connections only have a few choices: breed them, use them as a pony or a teaser, or rehome them.

And if they are a gelding, the number of choices drops tremendously. And if they’re not sound, even moreso.

And that is where I come in. I loved those foals.  I loved the long nights and the longer days.  I loved staring at them as they streaked across the field, or slept in their stalls.

So, I do cheer on those races.  I scream at the top of my lungs while staring at my Twinspires app on my iPhone from restaurants around the country – mortifying my boyfriend in the process. I want them to run well, and to run strong.  I want them to add black to their mothers page, and hopefully boost their brothers and sisters futures just a little bit.

Because for the next 15 years, that horse is going to face those consequences. One last race might mean one chipped knee.  One torn suspensory.  One bad experience. It could make the difference between an easy adoption or sale, or a horse who lingers in the field eating his weight in grain and being shod. It could make the difference between a life being loved by an aspiring upper level eventer and one hobbling along a field in constant mild pain.

It could make the difference between life, or death.

I have always wanted to complete the cycle on one of my horses.

I have watched as fillies return from the track to produce their own foals, and have also seen colts go on to stand as stallions.  I have gotten to watch from afar as some of “mine” have journeyed on to second careers, but I have never actually been able to be the one to ride them.

So I travelled from Lexington, Ky to Boyd’s Pass, Md yesterday to do exactly that.  A horse who was raised by Hinkle Farms under my watchful eye, but was purchased for $160,000 by Nick and Jacqui de Meric to pinhook into the 2 year old sales.  A horse who ran only ten times over the span of two years, but who received our adulation and cheers in every single start. A horse who’s connections chose to forfeit that one last race and instead placed him at New Vocations Thoroughbred Adoption in Lexington, Ky to secure him that second career.

And a horse that I then got to watch flourish in that second career for the past three years.

Eddie and his mom Lauren Sumner

He goes by a lot of names now, for I still call him Spring, Tom Hinkle refers to him as The Malibu Moon, his racing connections only know him as Excess Liquidity, and now his current owner puts him on competition entries as Crossfire, but affectionately calls him Eddie in the barn. 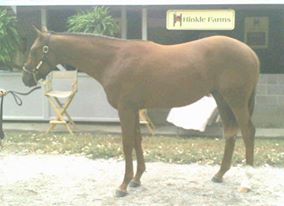 Eddie as a yearling in Book 1 Keeneland September 2010

I hadn’t seen Eddie, or “Spring”, since the fateful day where the gavel came down at $160,000. I was the one who led him to the ring, and I patted his neck on the way back with tears streaming down my face – uncertain as to who purchased him or what his future was.

But I was lucky.  The de Meric’s kept us in the loop and told us that they adored the horse just as much as I had. And for years I got to watch on platforms through the world wide web as he raced.

And at the end of his race career, his connections did what the good guys do – they gave him to New Vocations to adopt. And because he was still stunning, and more importantly, he was still sound, he was adopted quickly and sent to Maryland.

It had been almost 7 years since I last saw Eddie, but I swear he still knew it was me.  The girl who 7 years ago giggled as he came in from the paddock on his hind end.  The girl who massaged his joints and meticulously picked the straw from his tail.  The girl who would grab him in bear hugs to be lifted off the ground.

And as of last night, I got to check another thing off of the list.  I got to become the girl who rode him.

And I loved every minute of it.

But celebrating that hour of bliss doesn’t forfeit how important his pivotal years were.  It doesn’t null en void his ten starts.  And it certainly doesn’t ignore his life before.  But it was celebrated nonetheless.  With each circle, shoulder fore, and lengthening that I got to push him through, my smile only widened.

A life begun on a farm in Paris, Ky has now journeyed to so many places.  From the lucrative Keeneland sales to a training facility in Ocala, Florida.  From racetracks all along the Eastern seaboard; Florida, to New York, and even Maryland along the way.  To arrive at a rehoming facility only a few miles from his birthplace, and then a quick trailer ride back to the state of his final race at Laurel Park.

All of it is astonishing and great.  A good upbringing, a trip to the auction ring, some breaks through the starting gate, and then a retirement at the perfect time.

And now?  Now he can add over 15 starts at recognized events.  Currently competing at training level, with preliminary in the near future.  He can add hundreds of fences jumped, thousands of circles trotted, and a few blue ribbons won.

And to me, that second career doesn’t take anything away from the first.  It is not a one versus the other.  It is not black and white. It is not linear. It is not anti-racing, or pro-sport, it is simply thoroughbred-centric.

Last night proved that.  This journey with these thoroughbreds should be cyclical.  And last night, one circle became complete.

Lauren, Eddie, and I.

← Clipping my way through school
Surfing the wave. →

8 Comments on “A circle complete”