Why I Marched: Proof, not Protest

I wasn’t sure if I wanted to participate in the Million Womens March on Washington when I was first invited by a friend on social media.

I grew up in a family of lawyers, surgeons, and politicians – an educated bunch if there ever was one.  Sexism did not exist in my family, and women were invited into the arguments right alongside the men.  My grandmother was one of the brightest and impassioned women I had ever met, and there wasn’t a single woman for 3 generations back who wasn’t college educated.

And because of this, our holidays were spent arguing. My grandfather was an esteemed lawyer, and he would start every conversation with a topic. Us children and grandchildren were allowed to weigh in.  There only came a few stipulations – you could neither cry, nor scream, and if you made a statement without a fact, you were out.

It did not matter at that table which side of the argument you stood on, the rules were the same.  As we got older, he encouraged us to play both the plaintiff and the defendant.  He wanted us to use our minds and see the conversation from both sides of the table.  We were forced to rationalize other peoples feelings and opinions.

Out of his five grandchildren, three are lawyers.  One is a board certified orthopedic surgeon.  And then there is me.  The free spirit.  The naysayer.  The one who didn’t stick to the chosen path, but who found a path just the same.  The one who should be defending a doctorate in veterinary sciences in just a few short months.  With a focus on reproductive physiology, specifically on the innate immune response of the uterus. And who will use every ounce of those skills gained at that dining room table in that defense.

And I decided, just yesterday morning, that that would be why I would march. Only it wouldn’t be in Washington D.C., it would be in Lexington, Kentucky.

I would march for the woman who didn’t get to experience that upbringing.  The one who was always told she was lesser, never equal.  Who wasn’t given the opportunity of a college education, nonetheless a doctorate.  Who was told that women were created to produce embryos, not to study them.

I would march for the woman who has chosen to use her uterus for reproduction.  Or the one who had no choice.  For the woman who maybe understands that she is pregnant, but has no scientific basis for how fertilization occurred, or what her body is truly experiencing. Who seeks out assistance in this endeavor, and turns to Planned Parenthood.  Who wants nothing but a healthy baby, but can’t afford an expensive HMO.  So she walks down the street to her local clinic for her ultrasounds. Her prenatal vitamins.  Her advice.

I would march for the woman that does not want the embryo growing inside of her, but has nowhere to turn.  The one who was unsure if the condom broke, or who was told that contraception was a sin. Who has been listening to politicians tell her that gestational length is 9 months and not 10.  Who has been told that an abortion is murder.  Who has watched as her uterus is discussed on major networks.  By journalists who do not know what D&C even stands for, and simply shouts “DNC” over and over in a rage.

I would march for the young black woman who is experiencing suppression like mine, only far greater.  Simply because I have a different melanin circulating my body, and therefore was bestowed the ability to be greater. Better.  Smarter. Wealthier.  Right? My heritage traces back to Ireland, and theirs to Africa.  Both a suppressed people.  Both an enslaved people.  But I am greater, right?  Only I am not.  I am far from greater. And I want that to be known.

I would march for the latino or latina who is here illegally.  Whose parents found his or her hometown to be too dangerous and sent them across the border at the age of 13, with nothing but a backpack and a wad of cash.  Who tried to do it the legal way, saving up dollars every month to hire a lawyer to file for a visa.  Whose lawyer in Mexico took the $8,000 and ran.  Whose police officer was so corrupt that there was nothing that they could do to that lawyer.  So they saved up another $1,500 and hired a coyote. A scary man who would have unlimited access to their teenager as they raced across the border under the darkness of night.

I would march for the children that are born, whether they be mine, my sisters, to that young black woman, or the latina who lives next to us.  For those little girls and boys who will grow up in 10 or 20 years and ask why.  Why did that woman march?  Why was it needed?  Who were Donald Trump or Matt Bevin?  Mitch McConnell and Paul Ryan? And I hope that their mothers and fathers can sit them down and open up a history book, and explain that 2016 was a scary time.  A time where few people felt safe.  A time where few people got along.  And a time when their mother/aunt/father/uncle/brother/sister decided that that needed to end.

That the only thing to fear was fear itself.

And finally, I decided to march for me.  For a young woman who always seems to be sticking her neck out to be guillotined by the masses. Who goes to bed at night with tears streaming down her face after reading the negative comments.  The young woman who so many think has it together, but who is constantly questioning her ability.  Her strategy.  Her worth.  The young woman who questions everything she believes in constantly, and wonders when it is time to quit. I march for that same woman who swears that she will quit, and then is remotivated by the young women and their parents who reach out to tell her of the impact that she has. I march for them. Because I marched for me.

I was told that yesterday was a protest of Donald Trump and his administration, but honestly, my distrust of him was not a motive for me.

I did not march to protest anything.  Instead, I marched for proof. 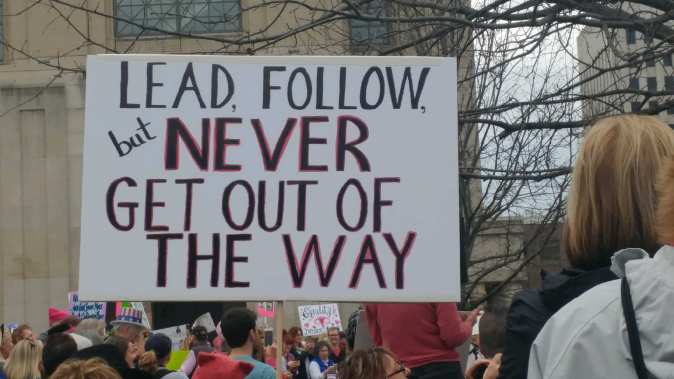 To prove to the woman from Jessamine County who reached out to my friend and I with tears in her eyes to say that she was overwhelmed with emotion after seeing the crowd because she didn’t know anyone “like her.”

To prove to the small latina girls who played with my dog as their mother and grandmother listened to the passionate speeches that they are just like me.  That their accent doesn’t make them any less.

To prove to my friend Maggie that she is not alone.  That her Facebook posts have not fallen on deaf ears.  That she does have a kindred spirit, even if it means marching on a bruised and broken foot.

To prove to the world that we can find empathy for all.  To the black women who found empathy and formed a line to shake the police officers hands as they marched by them, thanking them for their service to keep our citizens safe.

Women of all colors, all orientations, and all religions, who marched as one in a town that bleeds blue on every day of the year besides election day.

And finally, to prove to myself that I am not alone.  That there is a purpose for people like me.  For those of us who want to use our words, our minds, and our audiences for good. Women who want to get things done with praise, not punishment.  Who want to use our platforms for change through organized unity of peaceful protest.  Who were raised by the strongest of men who showed us that women were just as strong.  Just as capable.  Just as smart. 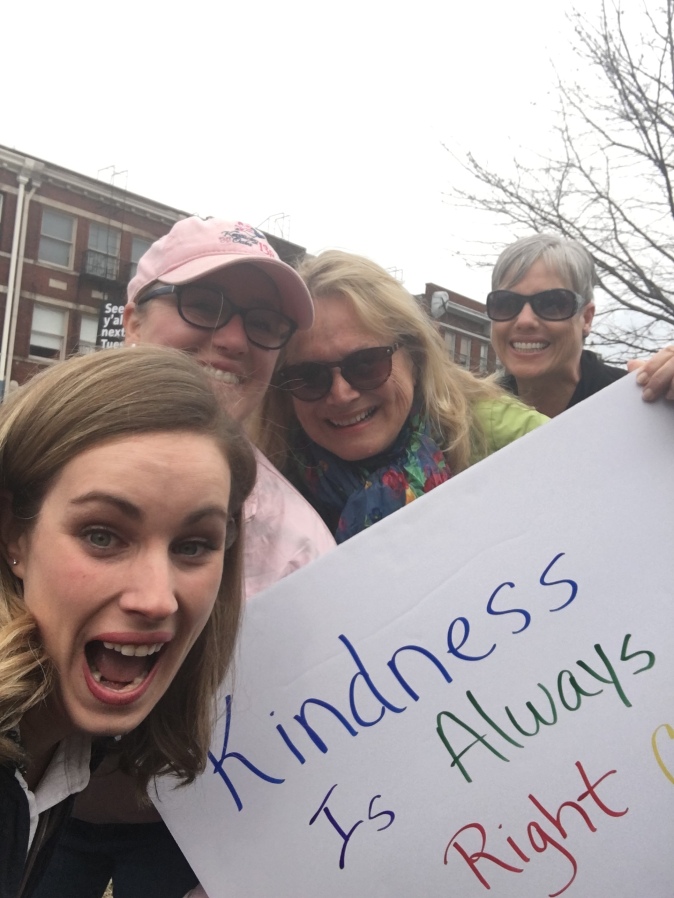 That is why I marched.

6 Comments on “Why I Marched: Proof, not Protest”