For Mak it is the hunters.  Packing young adults or old ladies around the 3’3 A/O’s, or even some equitation rounds.

But for Kennedy, affectionately known as the Elephant, it has always been different.  It will always be different.  Because my goals with him were always get him home, keep him safe, and if he is sound enough to be ridden – the joy that will bring will be unconfined.

And that is why this weekend was one of the best of my life.

It wasn’t Rolex, or the Maclay’s, heck – he was doing an intro dressage test and jumping 2′ poles…but it was a milestone.  A goal that was set almost a decade ago, and one that I never thought would happen.

I met Marilyn’s Guy as a naive 22 year old who had just faced the greatest heartache of her life.  My father had left this earth, and with him went my ability to function.  And I moved to Lexington Kentucky and drove around from farm to farm, begging the owners and  managers to let me work.  And I was finally hired – at Chesapeake Farm under the tutelage of owner Drew Nardiello, manager Kent Sweezey, and veterinarian Jorge Colon.

Unhappy in my relationship, unhappy in my life – I turned to the farm as not only a means to a paycheck, but also a means to happiness.  I jumped at every chance to be there early or stay there late.  What these men considered the most enthusiastic worker was actually just running, or numbing.  Consuming myself with menial tasks to keep my mind off of the truth.  I was fatherless and lacking support.  Lacking love.

But I finally found that support and that love, and it came in a 17.1hh 3 year old named Marilyn’s Guy.  He came to the farm for a surgery and a lay-up, and I was quickly tasked with his recovery and rehabilitation.  And each day, I knew that after hours of being abused and berated by the yearlings and the race-fit colts, I could sneak into his stall for a groom and a snuggle.  I would wrap my arms around his massive neck and he would carefully lift me off the ground in an embrace. 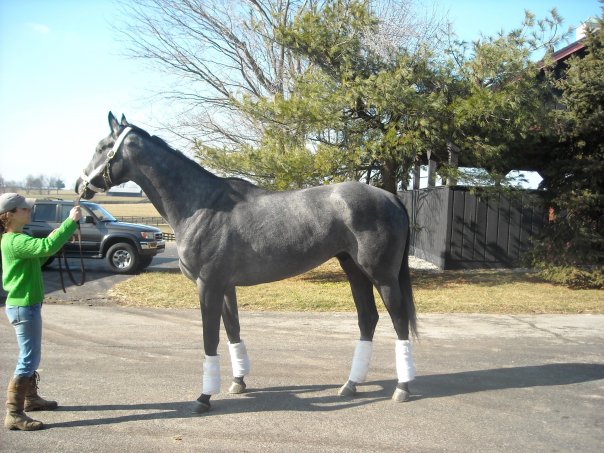 Marilyn’s Guy during a quick stop to the farm as a 4 yo.  So stunning.

But Marilyn’s Guy’s story didn’t end there.  It wasn’t the story that we love to read – where the girl falls in love, the horse wins $1 million dollars, and then the owners give him to the girl for happily ever after. No, Kennedy’s story didn’t end like that.  Instead he ran.  Again and again.  And he was claimed.  Again and again.  And he aged.  Year after year.  And I felt my love of this industry and this world dissipate.  Call after call.

Because we reached out to every owner, every trainer.  And our plea’s for his safe and happy retirement fell on deaf ears.  Until finally, at the age of 8, our demands were met with support instead of defense.  Marilyn’s Guy was coming home – we finally had him.

And I drove to the farm the day he shipped home with envisions of long hacks, cross country schools, and horse shows swarming my head.  I hopped from my truck, ran into the barn, and threw open the door – expecting him to immediately recognize my and lift my heart up again.

The day he came home…now nearly 9.

But he didn’t.  The twinkle in his eye was gone.  The gorgeous steel grey coat dull.  And the beautiful top line that I meticulously perfected with long 45 minute walks and supplementation was missing.  Marilyn’s Guy wasn’t there.  And in his place was a large, bitter, no-nonsense creature.

So we turned him out. Drew was tasked with the day-to-day job of attempting to bring back the horse I had loved, and he succeeded.  He spent 18 months getting his weight back on, his feet strong, and his coat to gleam. 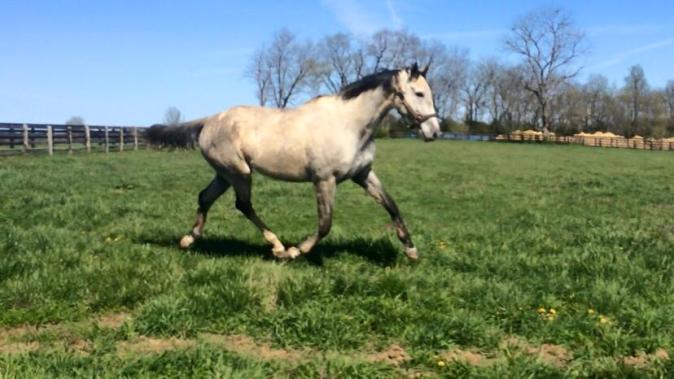 Kennedy during his 18 month break.

And then I got the call.  Did I finally want him?  I already owned 3 horses, and knew that on a graduate student budget, it would be impossible to take on a fourth.

I reached out to everyone I knew to see if they would want this task of taking on the large grey.  And I found the perfect scenario.  The man who owned the barn where I boarded said that he would take him.  At 6’1, Jeff needed a large horse – and at now 17.3hh and 1500 lbs Marilyn’s Guy seemed perfect.  I told him that I would assist in everything – training rides, blanketing, turn outs, and any treatments he may need.  And he laughed me off, and told me to just treat the horse as my own.

We brought Marilyn’s Guy back to Kurnikris Farm in February of 2016, and were quickly tasked with the retraining of this giant.

And we did it.  Yesterday I took Marilyn’s Guy, now known as Kennedy – or the Elephant – to the Kentucky Horse Park for his first horse show. He was bathed and braided, hacked around and warmed up, and then performed to the best of his abilities.

His dressage test was full of both moments of baby, but combined with moments of brilliance, and I giggled my way through the end as he popped his head up to 8 feet above ground – as only an Elephant can.

I warmed him up in a busy atmosphere for his stadium round, and was pleasantly surprised when he wasn’t perturbed by any of the distractions.  This war horse and graded stakes winner was unphased by the horses galloping around him and the rails flying.  His wizened brain and slow demeanor were evident in that moment – just like an Elephant should.

And then I took him into his stadium round and found myself smiling from ear to ear and he carried me around his course as if he had been doing this his entire life.  There was no moment of hesitation, and no confusion over this new endeavor in his life.  And he walked out of the ring with his head held high, his ears up and forward, and the twinkle was finally returned to his eye. He was so proud of himself – just like an Elephant would.

Proud of our completion ribbon

We didn’t win any fancy ribbon or pewter cup, as Kennedy finished 12th out of 14.  But every day that I get to experience something with Kennedy, I am winning.  It has been almost a decade in the making.  From falling in love, to getting him secured in aftercare, to getting his body back to a rideable one, and finally the journey that we have gone on to teach him the basics of his new career as a show pony. It has been years in the making, and yesterday was just the icing on the cake.

Because I am truly just happy that we have him.  That every day I can go to his field and see him.  That I can watch him play with the other thoroughbreds in his herd, and that the twinkle in his eye is back.  I am even more blessed by the fact that we finally have his body in a place where he was be utilized as a riding horse. That because of this, I can place training on him that will secure him a future if he ever needs a home outside of the barn where he currently resides.

Kennedy is now 10 years old and just beginning his second career as a lower level show horse.  His first show just shy of his 11th birthday – an older horse in many fields.  But thats ok, because we are in no rush.  I do not need Rolex in his future, nor the Maclay’s.  I just need a horse that is sound, happy, and most importantly – with me.

Kennedy with his best friend Nixon

← You should go and love yourself…
Bluebloods →

8 Comments on “The Elephant”