I was meandering down the lane-way, sitting astride a pony that I didn’t own and didn’t particularly care for, when I looked up and smiled.  Because what I saw was a testament to so many things. Friends on friends.  Good horses that persevere.  Humans that persevere for them.

A good ride with great friends

My girlfriends had asked to go for a hack, and I quickly agreed – acknowledging that I could get all of my horses ridden at once.  And when the Weather Channel app predicts a high of 94 – you agree to that.

Kaitlin and Amy are the yin to my yang, and yet somehow, amazingly, we get along so well.  Amy has been there from the age of 5 until present day.  She has stood by my side.  Through the highest of highs to the absolutely crushing lows, she has held my hand, held my hair, and held me high.  We live 500 miles apart, and yet know that we are only a phone call away.  A drive through the night.

She comes to Lexington twice a year, and I travel back home another once or twice.  And during those brief moments that we are together, life settles in just like we had never been apart.

And Kaitlin is so similar and yet so different.  She lives here in Lexington, and yet our schedules tend to keep us apart.  There will be weeks where we see each other constantly, and then months where we just can’t find a way to pencil it in.  And yet each time we are together, I laugh at how different we are.  Her organic salads and perfectly manicured hands. Her pristine 4Runner and running shoes. Her weekend consumed by 5K’s and wine, while mine are spent galloping XC with my airvest specially formatted to hold a beer or two.

But when the stars aligned, and she asked if she could come ride – I was quick to say yes.  She had only met Amy briefly in one of her previous visits, and yet I knew they would get along fabulously, and that the hack would be a giggle fest.

For what ties these two together, and separated me out, is that they are both true hunter riders.  And how they both somehow chose me as their “person” – this grunting, screaming, leg swinging, hair flopping disaster – I’ll never know.

Their hair was tucked away in their hair nets, while mine was falling out of a bun down my neck.  Their GPA’s were wiped of dust and stored in helmet bags, while my skull cap was tossed into a pile of bandages.  And their tall boots glistened while my half chaps seemingly unstitched themselves.

But the most obvious difference between them and me – is that they love the arena…and the arena gives me hives. So I kicked them out of it – and off we went into the wide unknown.

And as we meandered through the trees and up the hills, I started to giggle.  Because just like the opposites had somehow attracted to bond us all together, so had the horses underneath the two of them.

Nixon and Kennedy might seem so similar on paper, but they are so different in personality.  They might both be thoroughbreds, both be a staggering 17hh+, and both be graded stakes winners, but that is where the similarities end.

Nixon is fierce and aggressive, while Kennedy is meek and mild.  Nixon is alpha, while Kennedy is beta.  Nixon’s version of cuddling is a bite and a kick, while Kennedy loves nothing more than to scratch his forehead in your hands.  And Nixon thinks that the perfect day is a swift 10 second clip, while Kennedy would rather stop and take in the scenery. 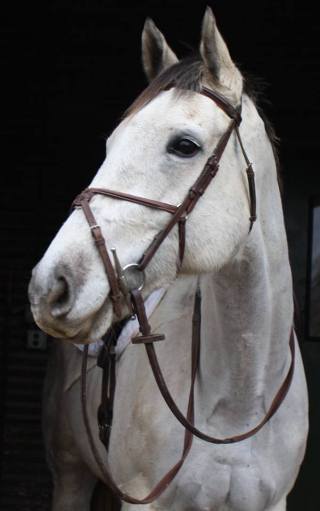 And both make me so happy.

I have already explained my love for Nixon – he is my hope for the future.  He is a Ferrari mounted on four size 3 shoes. He is the most athletic, scopey, brilliant horse I have ever sat on.  And each time that I ride him, I dismount with either the biggest smile of my life, or blood coming out of my eyes.  He is polarizing.  He is quirky.  He is strong.

Kennedy is different.  Kennedy is kind, he is easy. Like my truck, he is dependable.  He does exactly what he is asked, and is there in a pinch if it snows.  He is the horse I can pull out of a field after two weeks off and put anyone on.  The most beginner of riders, or my vet who wants to go jump some cross country jumps.

When your vet asks to come play, you say yes.  And you give her Kennedy.

And the smile on my face as I dismount him is a different one. Because every day I swing a leg over Kennedy, I acknowledge the tears, the anxiety, and the stubborn desire that it took to get him here.

The bond I have with him is so strong.  I have known him practically all of his life.  I remember walking into the stall at the Stallion Barn in June of 2009 and staring up at his massive frame.  I remember driving back to the Office and telling Drew with a straight face that this horse would be mine one day. 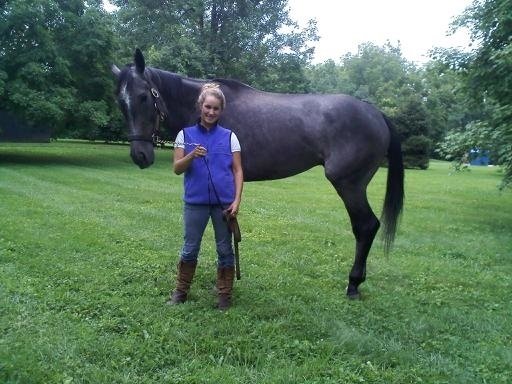 I can still see the other grooms wide eyes as I took him for his first walk hack after 2 months of stall rest in a cotton shank.  And I can still feel the heartbreak that I experienced when he slipped through the cracks and out of my reach.

…and I can still remember exactly where I was, what I was doing, and who I was with when I got him back.

But just like Amy and Kaitlin and I, these two opposites have attracted.  The unlikeliest of friends.  The positive and the negative somehow attracting.  They have become as thick as thieves, and best friends.

The day that I brought Kennedy home, Nixon immediately whinnied at him from his stall – and I stared perplexed.  How did they know each other?  Were they in the same barn at the same time?  These two winning stakes horses had had long storied lives, with many trainers between the two of them – so where did they overlap?  I’ll never know, but maybe someday I’ll find out.

And every day, I watch as Nixon brings out more in Kennedy. I stare at these two monstrosities as they colt-box in the field, nearly 3,000 pounds of muscle and bone climbing up on top of each other.  And where Nixon brings out the youth in Kennedy, Kennedy is a calming presence for Nixon.  Yin and yang, positive and negative, proton and electron.

And I smile, knowing how lucky I am to have these two.  Just like me and my girlfriends – opposites attracted.  Hunter and eventers.  Vegans and steaks. Nixon and Kennedy.  And at the end of the day, all of us united by one thing – a love of the horse.

← Hunters for Dummies: One Eventers Guide to the World of Draw Reins, Samshields, and Pearls
Hack It Out →

3 Comments on “When Opposites Attract”