To be sound, to be happy, to be safe.

A few months ago, Larry’s owner Drew called me and said that he thought Larry wanted a job.  For those of you who haven’t followed along with this story, Larry’s is one of trials and tribulations in the most circular sense.

We had bred him at Chesapeake Farm, raised him up to the racetrack, but he was sold privately as a 4 year old.  After winning his maiden by 13 lengths as a three year old, he was considered a horse for the future, but as is this little world, that never really happened.  He did flourish into a graded stakes winning horse, but not until his 6yo year.

But that didn’t matter to me.  I never cared if he won a dollar or a million, I just wanted this gentle giant to be sound.  To be happy.  To be safe.

I would watch his races from my office computer and daydream of that same stride carrying me over cross country courses.  I would redo his bandages as he shipped to his next track, and think of the color of polo’s that I would place on him.  And as I walked up and down the lanes of the farm for his hand walks, I craved nothing more than throwing a leg over him and being on him instead of astride.

Larry during a hand walk.

But instead of any of these things happening, I lost him.  I watched as he slipped between my fingers and into the grasp of people whom I did not know, and did not trust.  He was claimed, and claimed again, and I watched nervously as he fell the ranks on the track.  We (Drew and I) contacted every trainer and owner that we could track down, but none were receptive to the idea of retiring him.  He was a bread winner.  He might not be winning graded stakes races, but he hit the board in almost every start.  He paid his bills.  And because of this, he kept running. 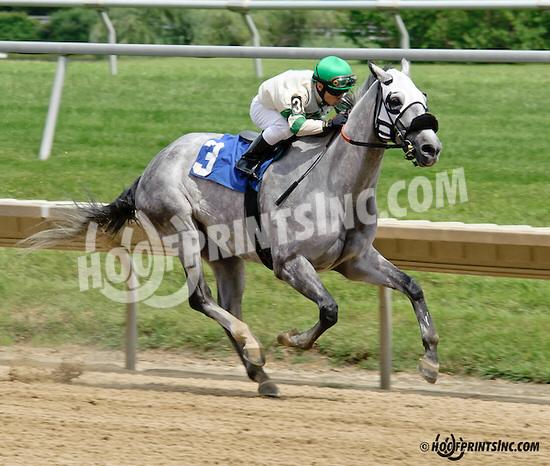 It wasn’t until the summer of 2014 that I started to get determined.  I began to demand retirement instead of ask.  I began to rummage through my resources and pound the pavement.

Because what the general public doesn’t see, or doesn’t realize, is that for every horse on the track, there are one, or two, or three previous owners, breeders, grooms, or managers with a big heart who loves them.  Who follows their every move.  Who would take them in a heart beat.

But it is not easy.  There is no database of email addresses and phone numbers to call owners.  You can call the stable office to contact a trainer, but many do not respond.  And even if you can finally get through to someone, it doesn’t mean that you can do anything more than speak politely to them and pray.

So pray we did.  And our prayers were finally answered.

Larry the day we got him retired

In September of 2014, I got him.  He was almost 9 years old, and had ran nearly 50 times.  He was shipped to the same farm where he was delivered into this world.  His shoes were pulled, and his nylon halter taken off.  He was turned out in a beautiful paddock at the Stallion Barn, and was allowed to just be A HORSE.

But his breeder knew that he wanted more.  That he was an athlete.  That he still had some good miles in him, so he contacted me and asked what I thought.

I knew that I couldn’t just give him to anyone.  That he was a graded stakes winner of almost $500,000 and that the same athleticism that carries a horse like that through the wire usually also equals HEAT and OPINIONS.  I had numerous people inquire about him, but the majority had red flags in their inquiries.  Refusing to give referrals, or asking the wrong questions, I feared for where he would end up if he didn’t go to the right home. And if I were the one to place him into a situation that ended up poorly, I would never be able to live with myself.

But I found a solution to that, because I brought him home.  To me.  The owner of my barn had listened to my stories of Larry for over a year, and had heard me speak of his size, his athleticism, his extreme intelligence.  He reached out to me last week and asked if maybe he could have Larry.  If I would be willing to help him retrain this horse for dressage or jumpers, for fox hunting and cross country.  And of course, I said yes.

So Larry came home today.  I finally, truly, really got him.  He will be Jeff’s personal horse, but I will get to ride him, hug him, and see him every day.  And that brings me so much joy. 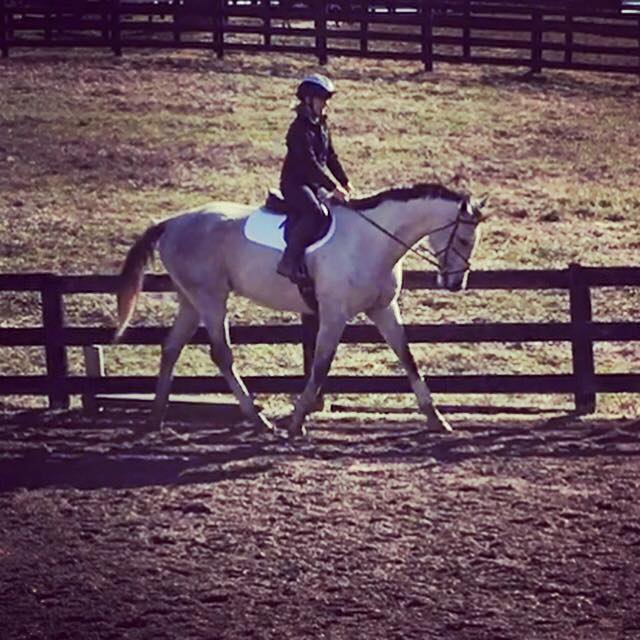 Larry in his first ride as a sport horse

I don’t know if eight years ago I chose Larry, or if Larry chose me, but we are together again. Today I got to take him for his first real ride and it was everything I could ask for and more.  I don’t know where this journey will take us, I do not know if he will ever even enter a show.  But what I do know is that Larry is sound, he is happy, and he is most definitely safe.

← A fistful of mane, a prayer to the God’s, and a good partner
The Workhorse →