Losing my passport (and my sanity)…

In January of 2014, I had that amazing opportunity to travel to Hamilton, New Zealand to present my research at an international conference on equine reproduction.  To say it was a once in a lifetime chance would put it lightly.  I met some amazing people, made some fantastic connections, and was able to have my “debutante ball” into this scientific community go quite well, I believe.  Unfortunately, on my travels back home into the States, I had the unfortunate mishap of losing my passport on the airplane that brought us in from Auckland to San Francisco.  I was quickly escorted into the detainment area and held for questioning.  The questions began smoothly:  what was my name?  Date of birth? City where I was born?  They then progressed into questions that most would find simple, but I found emotionally startling: where were my mother and father born?  Drained from 15 hours of flying along with the mental fear of not being allowed to continue on to Lexington (what do they even do to you? I didn’t want to find out), I felt tears began to trickle down my cheeks as I told the officer words you probably shouldn’t admit during detainment: I. Don’t. Know.

How could I not know my father’s history?  It is simply put: he was adopted.  For many this is just a simple conversation piece, but for me it triggers so many emotions.  The obvious fear of not getting into the country, sadness at not knowing my heritage and ancestry, but more importantly anger at a woman, more specifically a grandmother, that I will not only never meet, but also resent for the entirety of my life.

My father, in retrospect, on paper, and in real life, was an amazing man.  He was tender hearted, boisterous, fun loving, shy, and exuberant all in one.  He was the best of friends, the most dedicated husband, and the consumate “Dad”.  I found out that he had been adopted when I was in my teens – it was always something that he didn’t want to speak about, and I quickly came to understand that for his generation, it was believed to be something that was not shouted off the rooftops.  I never understood this, some of my best friends were adopted and they wore that title proudly – it was something that we spoke of fearlessly and with excitement.  It made them different; unique.  But for my father is was something he held close. Fast forward only a few years later and his adoption was brought front and center into our lives; something that he would not longer be able to avoid.  He had been battling leukemia for almost eight months when we were informed that his original bone marrow transplant had not worked and he was no longer in remission.  All of us in the immediate family had been tested to see if we were a match, only to be dismayed that none of us were.  Children were notoriously bad matches due to the fact that only half of their genetic material came from their parent, and spouses were even less likely due to obvious genetic reasons.  The best possibility for a patient requiring bone marrow was to have a sibling, or someone with as close to genetic compatibility, be their donor.  For my father, this forced him to come head first towards one of his most trying qualities: his adoption. 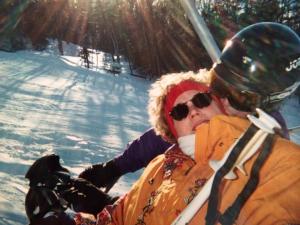 We began the process of tracking down his mother, knowing that this was no longer a generational gap that could be ignored, but as our last stitch effort to get him the cells that could make him well – that could make him LIVE.  We were told through the legal system that his biological mother was still alive, but advised to send a lawyer to meet with her to inquire about any other children that may be able and willing to literally save someone’s, more specifically my fathers, life.

Fast forward five and a half years.  As tears drip down my cheeks and I nervously chew on my lip, I was forced to say “I don’t know.”  Five years ago I found out that my biological grandmother was alive, but I also found out that I could be genetically related to the most heartless of people.  I will never know where my father was actually born, or if he had siblings who were a genetic match to him.  I will never know if he would have made a joke to me while walking me down the aisle, or if he would have spoiled my future children rotten by taking them to Boxcar Barney’s and buying a triple scoop of cookie dough.  His biological mother refused to participate with us.  She refused to tell us if she had other children, or even if she herself was a match.  In effect, she refused to acknowledge my father as her child and refused to acknowledge that the outcome of his battle with leukemia was officially on her hands.   Three months later my father lost his battle.

I was blessed with 22 years with an amazing father. I have now been blessed with five years of learning how to live on my own two feet.  My trip to New Zealand was one of those moments where I was forced to experience the highest of highs only to be leveled down to the lowest of lows.  I wanted nothing more than to call my father when I found out I was accepted to the conference, and have him edit my abstract.  I wanted his scientific mind to watch as I rehearsed my presentation, and his support as I traveled off of the continent for the first time.  But instead I made it through all of that on my own two feet, with the support of an amazing group that I have surrounded myself by in these past five years.  I know that genetically I may be related to someone I will resent for the entirety of my life, but that she also provided me with the man that has ushered me to where I am today. 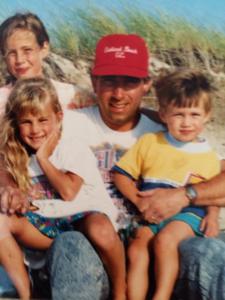 I got through customs be answering the other 98% of their questions, and was greeted by my fellow travelers who jabbed my shoulder and giggled at the fact that I was still able to get through detainment faster then their foreign visa’s got them through their custom’s.  I looked around and giggled, realizing that I had officially completed my trip to my first conference in equine reproduction.  I got there because of the girl my father raised, by I survived it, and the ride home, because of the woman I had become.