I read a comment the other day under one of these blogs that said “don’t disrespect all of western riding just because you have only ever loped along in western pleasure” and beer was almost snorted out of my nose.  I understand how this confusion could be perceived – I do currently ride English, I did post pictures of me four beating along in a sparkly saddle, and yes, I do have voluptuous blonde hair that looks FABULOUS under a silverbelly.  I almost hit reply to defend myself, ready to admonish the commenter for their lack of knowledge and insensitivity, but then realized with a giggle that my non-western pleasure cowgirl time deserved more than a comment, it deserved a story.

My teenage years, as already described, were spent doing a little bit of all English disciplines – hunters, a bit of jumpers, quite a lot of dressage, and if my horse decided that he was not afraid of the horse-eating sharks and snakes in the water complex, we even evented (if the sharks existed, we ATTEMPTED eventing — and failed…miserably).  Where I boarded trails were sparse, and the crowd was made up of other teenagers just like me – we circled, and circled again, and circled some more around a nice dirt arena – making sure our helmets were on and the gates were locked before picking up a trot.  It was fun, it was slightly challenging, but lord it was SAFE.  And as the years ticked on, I became more and more petrified of the GREAT OUTDOORS.  There was only one answer — to literally take a leap into the wilderness, and sink, or swim.  I did a little bit of both at Paradise Ranch.

I applied for, and was given, the position of wrangler at Paradise in Buffalo, Wyoming in the summer of 2006. I was a college junior, I was determined, and a little bit too egotistical for my own good. Making the move from Buffalo, NY to Buffalo, WY took me for the greatest adventure of my life.  Here are some of my stories.

1.  Don’t get cocky — I will never forget my first day of sauntering up to the (quite large) ranch foreman and telling him that I could “ride anything” –  a nice east coast term for “I ain’t scared.”  He looked down on me with a smirk and told me to saddle up.  I was ready.  I knew I could stick a buck – because, c’mon, I had previously ridden 12hh Chocolate – or “Bucker” in my childhood.  Putting my foot in the stirrup on an albino horse named Casper (real original guys), I shifted my weight, put my belly on the saddle, wiggled a bit – testing him for his reaction, and then swung up.  I gave a little head nod, proud of my amazing riding ability, gave a nudge with my rowels, and WHAM. I was off. With only one full buck, I was slammed to the ground and staring up at the white chest above me.  I quickly learned that these horses were not the NORM.  They bucked not out of excitable energy or rude stubbornness, but because they thought I was a mountain lion and they were attempting to SAVE THEIR LIVES. He would be the first of seven that I fell off of that first day.  I never once again have said “I can ride anything”.

2.  Learn the cowboy way — I went out to Wyoming to do a few things – one was to learn how to be a more efficient, braver, rider – another was to experience the wild west, and the third was to enhance my applications to vet school.  I knew the general “pony club” methods of treatment before heading out to the ranch – and by that, I mean that I could bandage absolutely everything, diagnose quite a bit, but the general rule of thumb had always been CALL THE VET.  At the ranch that wasn’t always an option, in fact, it rarely was.  We were the sole providers for these 200 horses, and if one of them was lame, sick, or injured – we were to assess, diagnose, AND treat.  I saw everything from fractures, to colics, to massive lacerations, and just about everything in between.  We vaccinated ourselves, we wormed ourselves, and we had to plan these schedules ourselves – something I had always depended on a vet for.  We had a cabinet with bandaging materials, some sedation, some pain medications, some banamine, a tube for oiling, and a gun – and that got us through the summer.  I learned more about thinking on my feet, trusting my instincts, and using my brain that summer than I think I ever have before, or maybe since.

Showing my surgeon of a father how to give an injection of penicillin.

3.  Cowgirls don’t cry — during my summers (yes, plural – I actually went back for a second round the following summer) I encountered more physical and emotional stress than I was ever prepared for.  From traumatic falls, to homesickness, euthanizing loved horses and falling in love with others, friendships gained, and eventually going back to college and drifting away – it was a hell of a ride.  But through it all I learned the definition of “cowgirl tough.”  Numerous horses came with problems, and it was our job to solve them.  There were no “trainers” to come to your rescue or time to spare – their job was to be ridden, and eventually ridden by a less experience guest, and if they could not accomplish that – they were an expenditure that served no purpose.  I learned how to assess problem horses, how to properly work through them, and most importantly – I learned to get back on.  There were no tears in Wyoming.  No one was going to sympathize with your sore butt when they had screws in their wrist or a broken femur.  We rallied together and worked as a team, and picked each other up without the need for crying…at least in public. 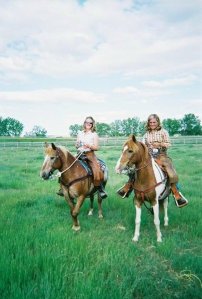 Some of these amazing friends who were there to always give a leg back up.

4.  Work hard, play harder — This job was not for the faint of heart, or the faint of muscle for that matter either.  Most days we were up hours before the sun, heading to the corrals to tack up and head out to push the horses back into the corrals as they were turned out to pasture at night.  We started our days around 5, and were usually heading back to the bunks around 6 or 7 — 7 days a week.  Did this burn us out?  Heck yes.  But we rallied.  Many of the staff had grown up in rodeo, and I decided to join the “circus” — first with barrels, then with quarter mile races, and eventually roping.  We would head to the arena after dinner and continue riding into the night, working together and honing skills that hadn’t been worked on throughout the day during the guest activities. And I realized that I LOVED roping.  We roped the horses out of the corral every morning, so I was able to learn in a slow motion practice – more of a ranch roping – eventually moving on to steers and team roping.  The group of wranglers on the ranch was amazing in teaching me their knowledge, and I thrived in the environment — it was, and still is, one of the coolest things to do on horseback, and something I wish I was still able to do. 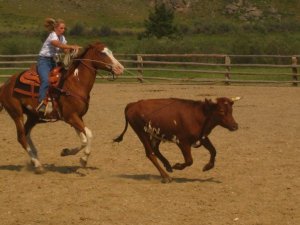 Roping practice at the ranch as well as evening rodeo at the weekly rodeos.

5.  The outside of a horse is good for the inside of a man — Finally, my time in Wyoming taught me how to RIDE.  I have recommended this position to any of the younger girls that I see at events fearful of water, ditches, galloping downhill, or any other “natural hazard.”  I came back from my summer and went to ride with my trainer only to have her admonish me and ask where my equitation had done — I couldn’t answer, but I could promise her that I wasn’t coming off.  I learned how to handle just about any terrain, and at any speed.  When you are working with horses – herding them for miles at a time – you do not amble, you GALLOP.  And you learn to shut up or get out.  I also learned that this was something that I loved- that horses were going to be part of my life, for the REST of my life.  I craved waking up for the next day.  I loved being in the mountains, on my favorite horse, with nothing but the sound of horses grazing and the fog lifting up over the Big Horn Mountains.  It was, quite simply, good for the soul. 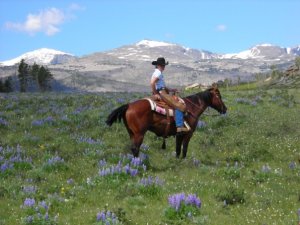 I ended up leaving the ranch in August 2007 knowing that I was entering into my senior year of college and would most likely not return.  I kept my rope, my saddle, and my chinks – and they are hanging proudly in my tack room.  Every once in a while, especially when I am having a bad day, I crave the feeling of my Billy Cook and a gallop through the mountains, and I pull down the tack, dust it off, and tack up my thoroughbred for a long hack through the fields.  It is my time for reflection – where I have come since my cowgirling days, where I plan to go, and how I hope to someday get back to my mountains.  Cause everyone knows, you can take the girl out of the mountains, but you can’t take the mountains out of the girl. 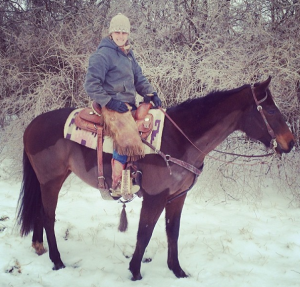